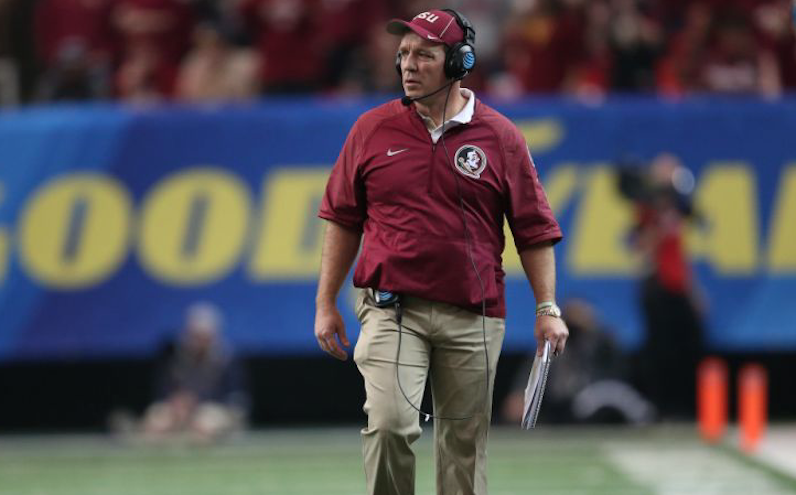 FSU football recruiting is soaring again under Jimbo Fisher, but one position is lagging behind. (AP Photo)

Florida State fans may claim that the Seminoles own the title of “DBU”. When it comes to “WRU” however, FSU is nowhere near the conversation.

This past week, FSU whiffed on a couple of four-star receivers once thought to be Florida State leans. Warren Thompson continued the trend of Seffner Armwood High School products passing on the Seminoles while Texas native Joshua Moore chose Nebraska.

Until the last few years, Florida State’s primary position concern was linebacker. Recently however, wide receiver seems to have taken its place.

Since 2008 (10 drafts), the Seminoles have had just two wide receivers taken in the NFL Draft. Kelvin Benjamin was a first round selection of the Carolina Panthers in 2014 while all-time leading receiver Rashad Greene went in the fifth round to the Jacksonville Jaguars a year later.

In FSU’s case, acquiring the talent has not been the problem. Over the last five cycles, the Seminoles have signed nine blue-chip wide receivers, including two five-stars. Many of those however, have simply not panned.

Two of the biggest examples are the two five stars – George Campbell and Ermon Lane. After catching just 19 passes over his first two seasons, Lane moved to safety in the middle of last season, which is where he’ll stay for his senior season in 2017. Campbell, now a redshirt sophomore, has just three career catches for 42 yards in his career.

In some cases, the struggles at the position have been more a case of bad luck than a flat lack of development. Campbell, for example, battled a season-ending groin injury last season while others like Ja’Vonn Harrison, Jarmon Fortson, Greg Dent and Isaiah Jones left the program prematurely.

With the recent struggles at the position, the subject for the blame has been wide receivers coach Lawrence Dawsey. A former receiver at FSU and an assistant since 2007, the blame for lack of development and recent recruiting failures in the Tampa area have fallen on his shoulders. Thompson is one of the key players from that area.

According to the 247Sports recruiter rankings for 2018, Dawsey is the lowest ranked recruiter among FSU assistants. It is however, still early in the process. Last season, Dawsey ranked third on the staff in recruiting behind defensive tackles coach and ACC Recruiter of the Year, Odell Haggins and running backs coach Jay Graham, who ranked second in the conference in recruiting. In 2016, Dawsey was seventh on the staff and second in 2015.

While Dawsey has become a recent recipient of ire, he has done a decent job developing some of the more unheralded receivers. Nyqwan Murray was a three-star recruit out of high school and is expected to be one of the best in the ACC in 2017 after a breakout second half of 2016.

Jesus Wilson, an undersized receiver and former three-star prospect, was leading the team receiving and on pace for nearly 800 yards last season before suffering a season-ending foot injury against Wake Forest. Rashad Greene, the school’s all-time leading receiver who played from 2011-14, became the only player to lead the team in receiving in four straight seasons and shattered a number of school-records under Dawsey’s tutelage.

Though most positions tend to be a mixed bag over time for any program, Florida State has real concerns at wide receiver. The causes vary from injuries, unexpected attrition and to some extent, Dawsey bears the blame. Fisher has a reputation for being very loyal when it comes to assistants. Unless things change when it comes to pass-catchers, the natives will eventually get restless.