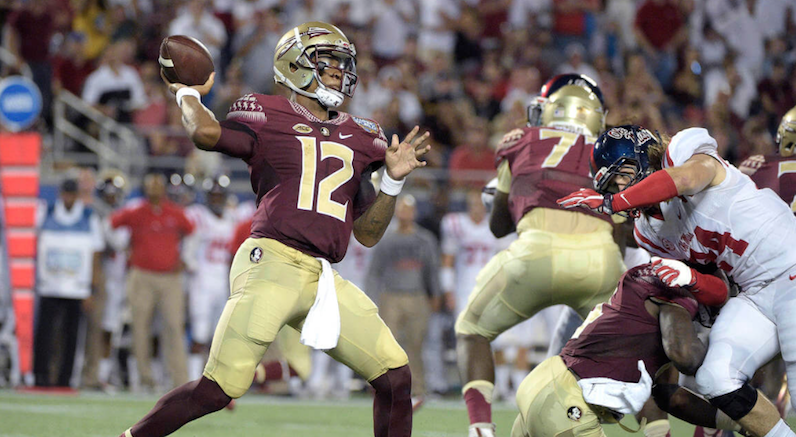 With Dalvin Cook off to the NFL, quarterback Deondre Francois will be the face of the FSU offense in 2017.

As a redshirt freshman last season, Francois logged 3,350 yards and 20 touchdowns passing while rushing for five more scores. Media and coaches named him ACC Rookie of the Year, and he led FSU to 10 wins, a No. 8 final ranking and its first major bowl victory since the BCS National Championship to cap the 2013 season.

With Cook, the school’s all-time leading rusher, and leading receiver Travis Rudolph gone, Francois looks to bear a bigger burden. Prognosticators, however, seem to think he’s up to the challenge.

A recent list released by Athlon Sports ranked the nation’s quarterbacks from 1-130. Reigning Heisman Trophy winner Lamar Jackson of Louisville topped the list; Francois, though, got a decent amount of respect, coming in at No. 13.

Despite some key pieces being gone, there is reason to believe that Francois can take the next step. He is a heady player with a cannon for an arm, deceptive athleticism, surprising toughness and untapped potential.

Francois could stand to shore up his accuracy downfield and work on anticipating a little better. Through the 2016 season, Francois improved when it came to going through his progressions, and he took fewer sacks.

The Orlando product has already won over his teammates. If he can improve in those other areas, progression as a passer is inevitable. There are a lot of good names on Athlon’s list, but by the time all is said and done, Francois could easily be a top-10 quarterback.

The two names listed in front of Francois that could fall behind him: UCLA’s Josh Rosen and Alabama’s Jalen Hurts.

That isn’t a knock on either player. Both have a ton of potential, but Francois might already be a bit better.

Rosen has garnered tons of attention as a pro prospect because of the tools he possesses. During his 2016 campaign that ended prematurely because of injuries, Rosen did post a slightly higher completion percentage than Francois. However, that was on fewer yards per attempt, a worse touchdown-to-interception ratio and a lower quarterback rating.

When comparing Hurts to Francois, you have to take into account Hurts’ running ability. Hurts is a true dual threat and finished with 954 yards on the ground last season. Overall last season, he had 186 more total yards than Francois, but in two more games.

When comparing the two against the three common opponents faced by each last season — Clemson, Ole Miss and Florida — Francois passed for 843 yards to Hurts’ 427. Francois averaged 7.5 yards per pass attempt to Hurts’ 5.2. Francois also completed 57.6 percent of his throws to Hurts’ 52.4.

Hurts threw two touchdowns and no interceptions in those games while Francois threw four TDs and two picks. On the ground, Hurts rushed for 210 yards and a score on 36 carries against common opponents. Francois rushed for 75 yards on 25 carries and one touchdown.

As far as ACC quarterbacks go, the only passer listed above Francois was the aforementioned Jackson. Last season, a big reason for the ACC’s success was that it had a deep group of quarterbacks.

Deshaun Watson, Nathan Peterman, Mitch Trubisky, Jerod Evans and Brad Kaaya, however, are all off to the NFL Draft. Aside from Francois and Jackson, the only other ACC bowl teams from a year ago that return a starting quarterback are Wake Forest (John Wolford) and NC State (Ryan Finley).

With a watered-down group of returning quarterbacks, Francois’ listing as the second-best quarterback in the ACC isn’t high acclaim. Finishing there has some historical significance, though. How? The team that has gone on to win the last eight ACC titles has had a quarterback who finished either first- or second-team all-conference.