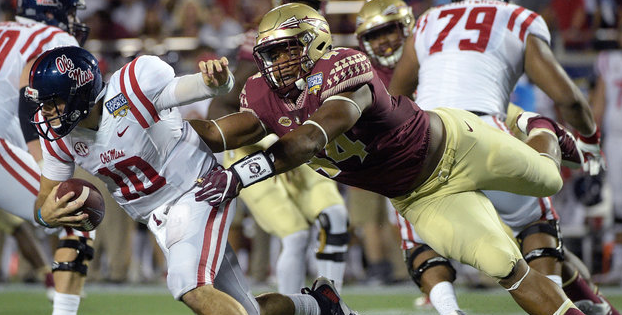 DeMarcus Walker recorded his first career sack in 2013 as a member of Florida State’s national championship team. A lot has changed in Tallahassee since that November afternoon against Idaho three years ago. What’s remained a constant, though, has been the pass rush of Walker, who leads the nation with 10.5 sacks through nine games in 2016.

Walker recorded 10.5 sacks a season ago as a junior but decided to return to school. Now as a senior, he’s been one of two bright spots — along with Tavarus McFadden — for an FSU defense that’s allowed nearly 30 points per game and 1.36 isolated points per successful play, which ranks 110th in the nation, according to Football Study Hall.

The ACC has several gifted pass-rushers, but Walker stands out among his peers.

The senior also ranks tops nationally in sack yardage. According to cfbstats.com, Walker’s sacks have set opponents back a combined 84 yards. No one else in America has more than 77 yards in this category. According to Football Study Hall, Florida State’s defensive line has a havoc rate of 7.2 percent, which ranks No. 19 in the nation. This accounts for the percentage of plays a defense forced a fumble, recorded a tackle for loss or defended a pass.

The Seminoles have been bad on defense, but their front four have been disruptive, including when they needed it most against NC State on Saturday.

Clinging to a three-point lead in the fourth quarter, the Wolfpack was driving just inside FSU territory. On 3rd-and-5, Ryan Finley dropped back to pass and was sacked by Walker — who came through for his team at an important high-leverage moment.

Two minutes later, Travis Rudolph was celebrating in the end zone after catching the go-ahead touchdown. This is nothing new for the Seminoles; they can count on Walker.

Let’s not forget that Walker blocked an extra-point attempt against Miami on Oct. 8 that would’ve tied the game at 20 with 1:38 remaining. FSU won the game 20-19.

With four games remaining on Florida State’s schedule (including a to-be-determined bowl game), Walker has a couple of records in view. He also leads FSU with 51 total tackles and has 23 career sacks, which is tied with Alonzo Jackson, Andre Wadsworth and Everette Brown for sixth all-time in program history. Reinard Wilson is the school’s career sack leader with 35.5, and that’s almost certainly out of reach. However, Walker is likely to usurp Ron Wilson (25 sacks) for third all-time.

Peter Boulware’s 19 sacks in the 1996 season are untouchable, but Walker is on pace to record 15 sacks this fall. That would be the third-most in a single season.

Last month, I named Walker my midseason ACC Defensive Player of the Year; he’s continued to wreck havoc ever since. FSU’s star could’ve taken off for the NFL a year ago, and no one would’ve questioned him. However, he returned to school and is registering one of the greatest individual seasons in the history of one of college football’s storied programs.

NFL teams will take note; Sports Illustrated has Walker as a top-20 draft pick. So don’t be surprised on a Sunday next fall when you flip on your television and catch Walker chasing around another helpless quarterback.