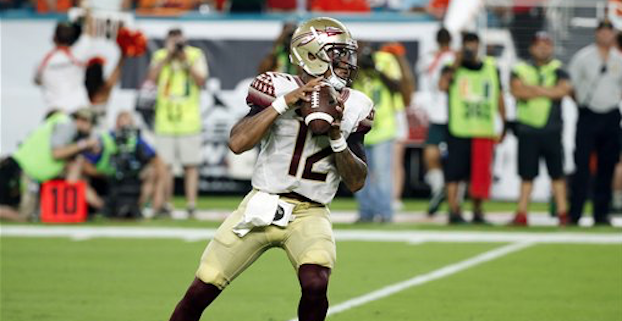 Deondre Francois has started all seven games at quarterback for Florida State this season. (AP Photo)

Although Florida State isn’t in position to reach the College Football Playoff, freshman quarterback Deondre Francois has set himself up to become this year’s ACC Rookie of the Year.

Through seven games, Francois has completed 62.4 percent of his passes, throwing 10 touchdowns to three interceptions. In addition, he has thrown for over 315 yards in three contests.

With Francois under center, Florida State has scored 35 or more points in four of its seven games.

Although Francois has the inside track to league rookie of the year honors, it’s not a done deal.

Duke quarterback Daniel Jones might be Francois’ stiffest competition as the Blue Devil freshman is the only other ACC frosh in the ACC’s top 10 in total offense, total offensive plays, total yards and touchdowns. Jones has gotten off to a solid start for Duke, with 1,584 passing yards and 12 total touchdowns.

Dedrick Mills will also challenge Francois. The Georgia Tech running back has rushed for 446 yards and nine touchdowns in his first seven games. Mills’ nine rushing touchdowns ranks second in the ACC, behind only Louisville’s Lamar Jackson.

Clemson defensive tackle Dexter Lawrence has stood out with 33 tackles and two sacks through seven contests. The Tigers are happy with what Lawrence has done along the defensive line so far.

Francois should be poised for solid outings in upcoming games against NC State, Boston College and Syracuse. Big performances against the Wolfpack, Eagles and Orange, along with reasonably solid showings against Clemson and Florida, should position Francois well to become the 2016 ACC Rookie of the Year.

But it won’t come easily if Jones and Mills keep playing well.