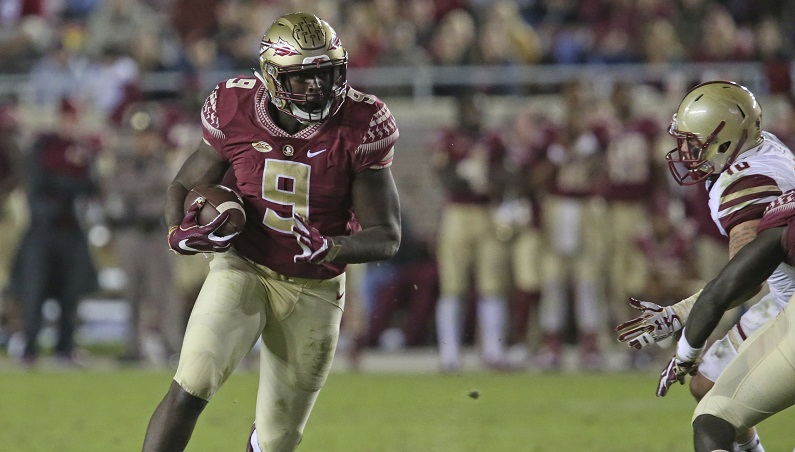 Florida State's Jacques Patrick looking for running room against Boston College's defense in an NCAA college football game in Tallahassee, Fla. After two years of being behind Dalvin Cook on the depth chart, Jacques Patrick is ready to take the lessons he learned from watching Cook and become Florida State's lead running back this season. (AP Photo/Steve Cannon)

Big things are expected of No. 3 Florida State as the 2017 season approaches. The Seminoles are coming off of a 10-win campaign and are a popular pick early on to win the ACC and make an appearance in the College Football Playoff.

As the 2017 campaign arrives, here are five players who look to be in for a breakout season:

Replacing Consensus All-American and FSU’s all-time leading rusher, Dalvin Cook, won’t be a one-man job, but early on, the bulk of that responsibility will fall on junior Jacques Patrick. Patrick, a 230-pound back, has performed admirably as the No. 2 behind Cook throughout his career. Despite his large frame, Patrick is shifty and a competent receiver out of the backfield. On the only two occasions in his career where he received at least 20 carries, he eclipsed the 100-yard rushing mark both times.

With three big-time contributors at wide receiver in Travis Rudolph, Kermit Whitfield and Jesus Wilson all gone and Da’Vante Phillips indefinitely suspended, expect Keith Gavin to take on a bigger role in 2017. Gavin did not have a catch as a freshman in 2016, but his 66-yard kickoff return against Michigan in the Orange Bowl set up the winning score. Gavin is listed at 6-foot-3 and 225 pounds, but he is the complete package with ridiculous athletic ability. He can also stretch the field.

Redshirt junior Ryan Izzo is primed to take the next step in 2017 after serving as the starting tight end in each of the last two seasons. FSU is deep at the position, but Izzo is the complete package, with good blocking ability, good hands and deceptive athleticism. With FSU returning as few as four scholarship receivers, don’t be surprised if the tight end plays a bigger role in the passing game this season and that starts with Izzo.

Once considered the top high school player in the country, junior Josh Sweat has contributed since the first day for Florida State. With DeMarcus Walker off to the NFL, Sweat looks to be primed for a breakout year as he could move from the “BUCK” position to the strong side. Although the numbers weren’t eye-popping as a freshman in 2015, Sweat finished with seven sacks and 11.5 tackles for loss last season. Sweat has been able to put on weight without losing any of his explosiveness off the edge. If he puts it all together, Sweat could be in for an All-American season.

With Marquez White gone, Florida State needs to find someone to man the cornerback position opposite Tarvarus McFadden and Virginia native, Levonta Taylor, may be that guy. A deep thigh bruise limited Taylor at times last season, but the sophomore has excellent ball skills and is a physical player despite being just 5-10 and less than 190 pounds. Taylor is just one of many young talents in the secondary, but has the potential to be a lockdown corner. He could also be used at FSU’s “STAR” position.