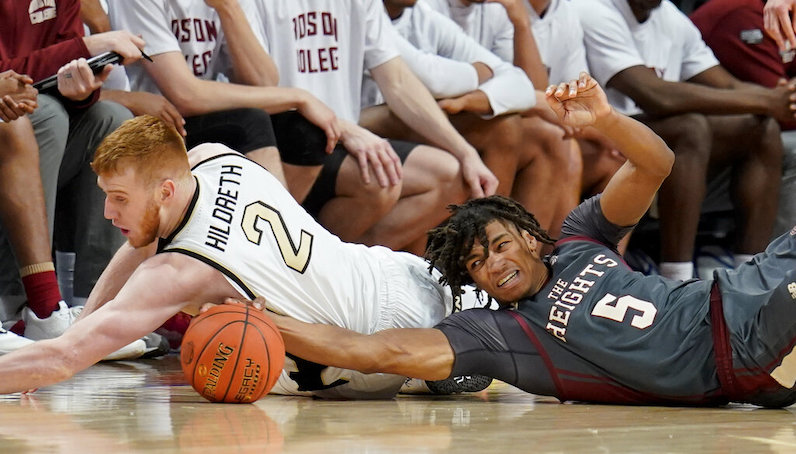 Thus far, the biggest upset of the 2022 ACC Tournament came on Wednesday — when Boston College upset Wake Forest, 82-77 in overtime. Steve Forbes, the ACC Coach of the Year, and his team arrived in Brooklyn on the Bubble for the NCAA Tournament; however, the Demon Deacons could feel pretty good about their postseason position. All they needed to do was take care of Boston College, and they’d most likely be fine.

The bubble was not kind today for Wake Forest & Xavier, who both entered as 1 of @ESPNLunardi's Last 4 In.

Xavier had a 92% chance to win, up 6 with 0:53 left before losing to Butler. pic.twitter.com/RuspyZIHGt

Currently, Wake Forest remains an 11-seed in the Bracket Matrix projections. The Demon Deacons dropped five spots in the NET rankings, too: from No. 39 back to No. 44. That’s not optimal, although ESPN Bracketologist Joe Lunardi still has Wake Forest in his field.

According to Lunardi, Wake Forest sits in the Last Four In category. Virginia lands in First Four out. Virginia Tech is in the Next Four Out category. However, the two teams from the Commonwealth are still playing in Brooklyn, following wild wins on Wednesday.

Obviously, a lot can change in the next few days, too. A lot of basketball will be played between now and Sunday afternoon. Wake Forest must sit on the sideline for that entire stretch.

Falling one seed line on Wednesday of Champ Week when you’re already in double digits is suboptimal, and bubble's gonna bubble from here to Sunday. Still, Deacs could survive.

Dayton, led by head coach Anthony Grant, is now a team to watch for Wake Forest fans. The Flyers (No. 52 in the NET) are in wait-and-see mode at the Atlantic 10 Tournament. Dayton is the No. 2 seed in that event, which means no games until Friday in the quarterfinals.

George Mason and Fordham will play on Thursday. The winner of that will play Dayton on Friday.