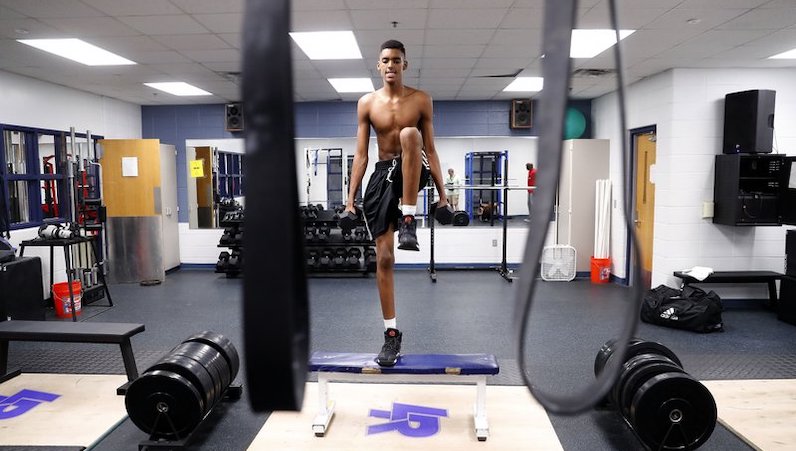 In this Oct. 10, 2017, photo, Emoni Bates works out in a weight room in Ypsilanti, Mich. The 6-foot-7, 13-year-old is one of the most coveted young basketball players in hoops. (AP Photo/Paul Sancya)

According to a report from ESPN’s Jeff Borzello, Emoni Bates — the No. 1 prospect in the 2022 recruiting class, arguably the top prep prospect in the last 10 years — has committed to Michigan State.

Bates, 16, has been atop the recruiting index for years now; the 6-foot-8, 200-pound forward hails from Ypsilanti, Michigan. Before heading to East Lansing, though, Bates will play the 2020-21 season at a new prep school that his father, Elgin, started.

BREAKING: Emoni Bates, considered the best high school prospect in more than a decade, has committed to Michigan State.

Bates, who draws comparison to Kevin Durant due to his shot-making and and handling package, had offers from other powerhouse programs, like Kentucky, Michigan and Florida State. However, his recruiting process was rather limited in scope.

In Borzello’s report, Michigan State is noted as the only school that truly attempted to recruit Bates — long considered a Spartan lean. In fact, Michigan State was apparently the only program to contact Bates two weeks ago — on June 15, the first day college coaches can directly call 2022 prospects.

(Duke offered Bates a scholarship last August, although there never appeared to be much of a connection between the two.)

Proximity was a major factor for MSU; so, too, was Tom Izzo’s stick-to-itiveness. Izzo and Michigan State have recruited Bates since he was in the 7th grade. It’s obvious that there’s a very genuine connection between Bates, his family and Michigan State’s coaching staff.

There’s also long been an assumption that Bates would jump to the NBA as soon as he was given the chance; he said as much earlier this spring. With the one-and-done rule still in place, though, and unlikely to change anytime too soon, Bates is now college-bound.

In theory, Bates also seems like a natural to fit with the NBA G League’s newly-launched developmental program. Led by Jalen Green, the No. 2 prospect in the 2020 class, several other 5-star prospects have opted to spend the 2020-21 season with this new initiative. Green will command upwards of $500,000 next year, while having the opportunity to seek endorsement money, too.

Bates, however, doesn’t plan to go that route, currently, though he did leave himself open for other possibilities.

He said he would rather play college basketball than go to the G League.

Back in January this year, Bates turned 16. As of right now, he’s on track to graduate a year early — in 2021. Bates could do this and arrive a year early to Michigan State; however, he would still be unable to enter the 2022 NBA Draft. Come June 2022, Bates will be 18 (and five months). In this scenario, he’s still too young to enter the NBA Draft, which requires a player be at least 19 years old and a year removed from his graduating class.