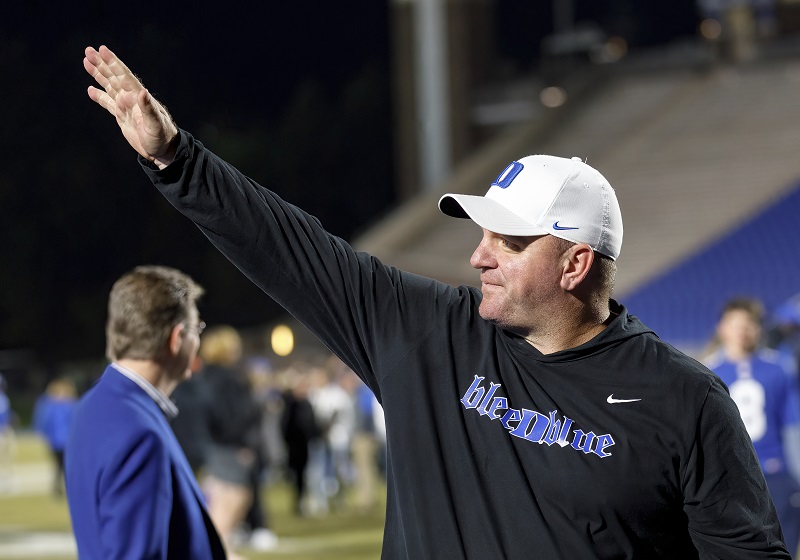 Duke’s Mike Elko has been voted the Atlantic Coast Conference Football Coach of the Year in his first season at the helm after leading the Blue Devils to eight regular-season wins and a tie for second place in the Coastal Division.

Elko was the overwhelming choice of a 65-member voting panel after Duke defied the ACC Kickoff preseason media poll that predicted a second-straight last-place division finish.

Under Elko’s watch, the Blue Devils immediately returned as contenders for the division title with a 5-3 league record and earned bowl eligibility with an 8-4 overall regular-season mark. The turnaround came one season after Duke posted a 3-9 overall record that included an 0-8 mark in ACC play.

Elko received the ACC Coach of the Year nod from 44 members of the voting panel, which consisted of 51 select media members and the league’s 14 head coaches. Florida State’s Mike Norvell followed with 18 votes.

Elko, who took the reins in Durham following two decades as a successful defensive coordinator at the collegiate level, became the first Duke head coach to win eight games in his first season since Fred Goldsmith did so in 1994 (8-4). Duke’s five ACC wins are the most for the Blue Devils since 2014, when the program earned a trip to the Sun Bowl.

This marks the ninth time a Duke head coach has been honored as the ACC Football Coach of the Year and the first since David Cutcliffe was recognized back-to-back in 2012 and 2013.

The breakdown of voting for 2022 ACC Football Coach of the Year: