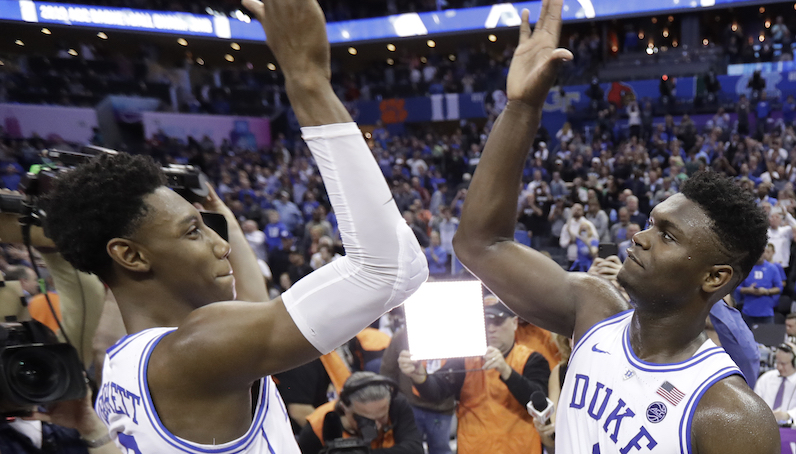 Charlotte — In a basketball season where Zion Williamson captivated the sports landscape, the Duke superstar added another accomplishment on Saturday night: ACC Champion. Duke claimed its 21st ACC basketball title, and the 15th for head coach Mike Krzyzewski, with a 73-63 win over Florida State.

As usual, Williamson (+12) led the way with 21 points, five rebounds, two blocks and two assists. For his tremendous efforts, Williamson was named the tournament’s MVP. Williamson, who returned to the floor from injury (knee sprain) on Thursday night against Syracuse, told ESPN’s Jay Bilas after the game why he came back. “I couldn’t abandon my brothers like that.”

The performance was the 19th time this season that Williamson has scored 20+ points.

At the crest of Duke’s defense was Tre Jones, who was sensational, too. The freshman point harassed Florida State guards all night with full-court ball pressure, and put together a wonderful stat line: 18 points (8-of-14 FGA) and six assists.

Most Points by Duke Player at #ACCTourney (3 gms)

Duke shot just 2-of-14 on 3-point attempts (14 3P%); however, the Blue Devils dominated in the paint. With 19 combined dunks and layups, Duke scored 42 points in the paint.

On the other end, Florida State played valiantly — never backing down. Terance Mann was a blur defensively, front Zion in the post, and doing everything possible to stay in front of him. Mann finished with 12 points and eight rebounds.

Once again, Florida State’s leading scorer was Mfiondu Kabengele; the ACC’s Sixth Man of the Year splashed three 3-pointers and scored 14 points — to go along with three blocks.