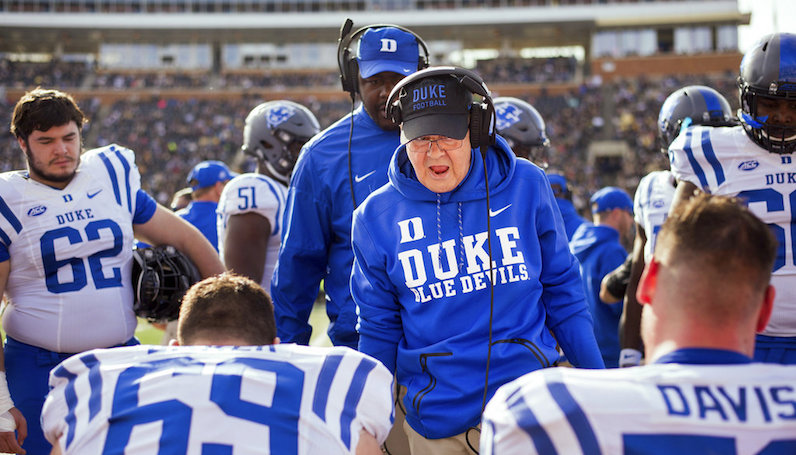 Duke head coach David Cutcliffe speaks to a couple of players on the sidelines after scoring a touchdown in the second quarter of an NCAA football game against Wake Forest on Saturday, Nov. 25, 2017, at BB&T Field in Winston-Salem, N.C. The Duke Blue Devils defeated the Wake Forest Deacons, 31-23. (Allison Lee Isley/The Winston-Salem Journal via AP)

Over the last decade, David Cutcliffe has helped lift Duke Football to new heights. And on Friday, Duke announced a two-year contract extension with Cutcliffe that runs until June 2023.

Duke announces a two-year contract extension for coach David Cutcliffe that runs through the 2022 season.

Cutcliffe, 64, has been at Duke since the 2008 season; he’s the longest-tenured football coach in the ACC. However, over the last half-dozen years, the program has truly rounded into form. Dating back to the 2012 season, Duke has gone to six bowl games in seven years, including back-to-back postseason wins. In four of those seven seasons, Duke spent some time ranked in the AP Top 25.

The high-water mark of Cutcliffe’s tenure was the charmed 2013 season, when Duke won 10 games (the most in program history) and the ACC Coastal Division title. The Blue Devils finished the season ranked 23rd in the AP Poll.