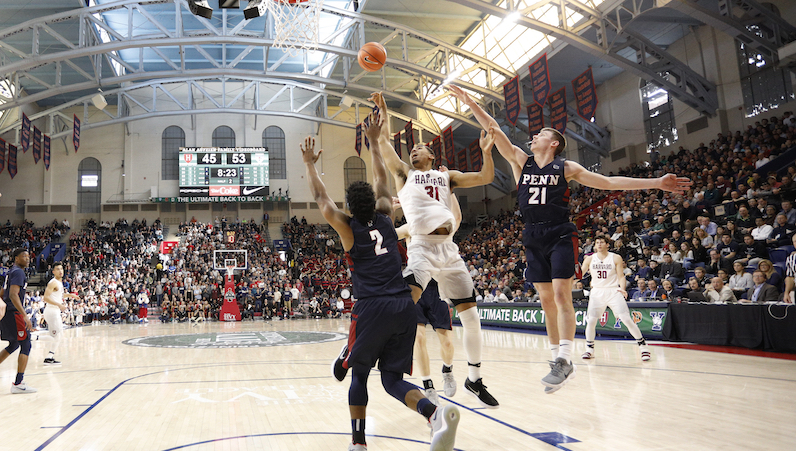 Harvard's Seth Towns, center, puts up the shot as he splits between Pennsylvania's Antonio Woods, left, and Ryan Betley, right, during the second half of an NCAA college basketball championship game in the Ivy League Tournament , Sunday, March 11, 2018, in Philadelphia. Penn won 68-65. (AP Photo/Chris Szagola)

Multiple sources have now reported that Duke is in contact with one of the top graduate transfers in the NCAA’s portal: Seth Towns. As a graduate transfer, Towns has immediate eligibility wherever he lands.

Closer to the basket, Towns shot just under 50 percent on that rim (8 dunks), while shooting 81.1 percent from the free throw line. Towns also posted a sturdy defensive rebound rate of 20 percent, which went along with an assist rate of 15.9 percent. Those are both solid numbers.

Virginia and Ohio State are also very interested in Towns. It’s easy to see his fit in both program’s offensive systems. Syracuse, Maryland, Kansas and Michigan are interested, too.

As the coronavirus has sent the sports universe scrambling, a lot of uncertainty surrounds the NBA and its annual draft. Starting with the leadership of commissioner Adam Silver, the NBA has been transparent and vocal regarding a variety of matters; however, things pertaining to the draft remain relatively mysterious. The way things develop could have a serious impact on Duke’s roster next season.

We’ll know more in the future, but for now these waters remain incredibly murky. That could push players — at Duke and elsewhere — to return for another season of college basketball.

Regardless, there will still be roster turnover in Durham. Jack White, Javin DeLaurier and Justin Robinson are gone; Vernon Carey Jr. and Tre Jones seem destined for early draft decisions. (What Jones decides to do will still be interesting, though. Jones projects as a first round pick with a fairly high degree of confidence, but there’s no guarantee, currently.)

There’s far less certainty surrounding Cassius Stanley — a fringy first round prospect who will turn 21 in August — and Matthew Hurt.

Hurt shot the ball with wonderful efficiency this season: 39.3 percent on 3-point looks and 57.1 percent on 2-point attempts. (He improved his release time as the season went along, too.)

However, his playing time fluctuated, especially late in the season when Duke tightened the rotation and tooled around with small-ball lineups that included Wendell Moore Jr. as the de facto power forward. Hurt’s a grinder who had some moments on the defensive end this season, but he really needs to get stronger and improve his footwork as a space defender.

Unfortunately, Hurt’s draft stock took a dip this season; now, the process to get valuable feedback from NBA teams has, at the least, been seriously disrupted.

A strong six-man recruiting class will arrive this summer — again, assuming there’s some reduction in concerns regarding COVID-19. This class includes several highly-regarded combo forwards: Jalen Johnson, a 5-star prospect and a borderline top-10 recruit, and 4-stars Henry Coleman and Jaemyn Brakefield. All three of those guys have serious potential as hybrid forwards in Duke’s 4-out offense.

(Note: If Hurt does return, though, he will gobble up a lot of the power forward minutes and function as an important offensive asset.)

Towns played for former Duke guard and assistant coach Tommy Amaker at Harvard. Most of his minutes came as a power forward, too. (Quick reminder: former Duke center Wendell Carter Jr. almost went to Harvard. If that happened, he would’ve played with Towns during the 2017-18 season.)

In theory, there could be a bit of a logjam at the position. Although it’s worth noting that with VCJ likely headed to the NBA and DeLaurier leaving, too, Duke will need to replace the vast majority of its center minutes next season.

Top-30 recruit Mark Williams, a 7-footer from the IMG Academy, will certainly factor into that mix. However, it seems very possible that Hurt — if he returns — and Brakefield will be asked to play minutes at the pivot as well. (Hypothetical lineups with Hurt at the 5 could really space the floor and open up driving gaps.) At 6-foot-8 and 240 pounds, Coleman has a frame that can play in the paint, too.

This should be a part of the pitch to Towns, especially if Hurt leaves: creative, spacey lineups that offer playing time opportunities.