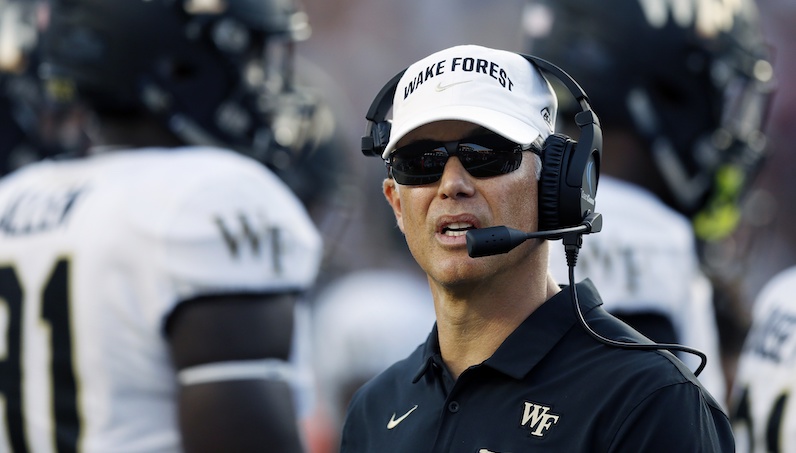 Wake Forest head coach Dave Clawson stands on the field during a timeout in the second half of an NCAA college football game against Boston College in Boston, Saturday, Sept. 28, 2019. (AP Photo/Michael Dwyer)

After five games, Wake Forest is undefeated and in the midst of a potentially special season. Ranked No. 19 in this week’s AP Poll, the Demon Deacons feature one of the most efficient offenses in the FBS — led by quarterback Jamie Newman and receivers Scotty Washington and Sage Surratt. Wake Forest also has a balanced defense, which features future pro prospects Essang Bassey, Justin Strnad and, of course, Boogie Basham.

The Deacons are set for three straight home games in Winston-Salem, too. That stretch starts this Saturday with Louisville — followed by Florida State and NC State. Ahead of that game, head coach Dave Clawson rejoined The David Glenn Show to discuss how to block out the noise, Newman’s strong play in 2019, minimizing mistakes, preparing for Louisville and recruiting to Wake Forest.

Click to listen to the full interview with Dave Clawson

Listen to more of The DG Show

Ahead of the 2019-20 season, Duke’s Mike Krzyzewski stops by the show