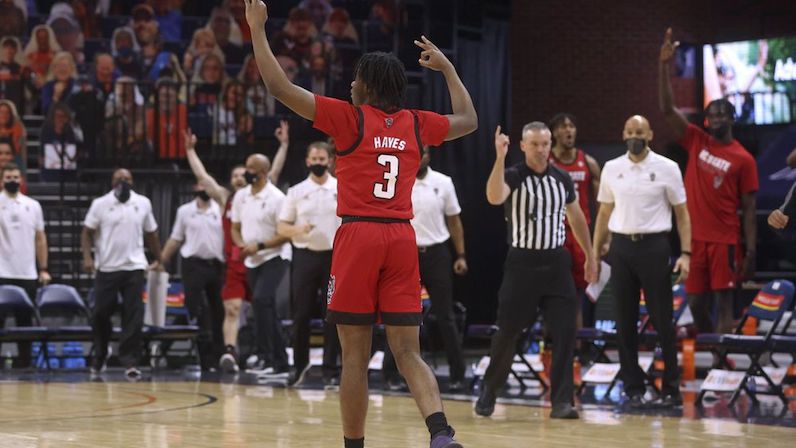 If you covered NC State basketball this season, it won’t come as much surprise, but point guard Cam Hayes will enter the NCAA transfer portal.

In the 2020-21 season, Hayes put together an encouraging freshman campaign (36.4 3P%), which included strong pick-and-roll scoring. Following the season, Shakeel Moore, another freshman point guard, entered the 2021 transfer portal and left for Mississippi State. It seemed as though the point guard role at NC State belonged to Hayes — now and into the future.

That, however, never quite got off the ground. Hayes started the 2021-22 season in a slump and things never really improved. Eventually, Kevin Keatts shifted ball-handling duties to Dereon Seabron and freshman combo guard Terquavion Smith.

Hayes played in all 32 games; however, after after starting the first 13 games, Hayes came off the bench when the calendar flipped to January. During his sophomore season, Hayes shot under 40 percent on 2-point attempts and 25 percent on 3-point attempts (25-of-100 3PA).

In general, Hayes saw his efficiency crater; he got to the line less frequently and his true shooting rate dropped to 42.5 percent.

As a secondary option, and as a reserve, Hayes never quite found a comfortable level, while Seabron controlled the offense. It was an understandable move by Keatts: Seabron is a great player and one of the best slash-and-kick creators in the country. It’s good to have the ball in his hands. However, it pushed Hayes into a role he was less comfortable and (seemingly) less enthused to play in.

It’s All Downhill From Here: Dereon Seabron is the ACC’s Most Improved Player