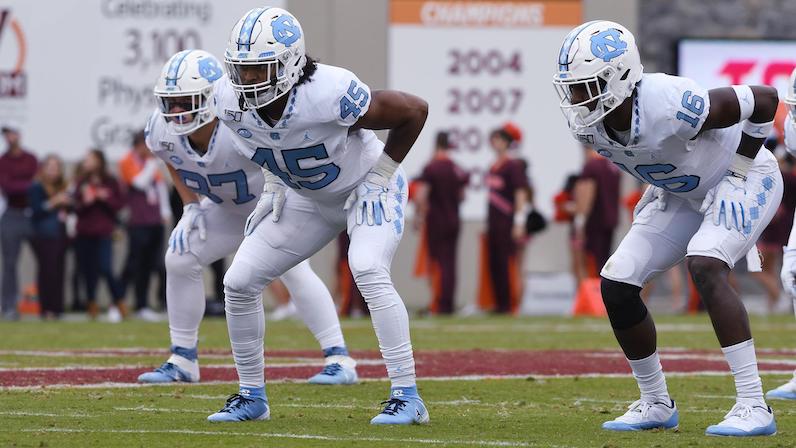 DJ Ford (16) is one of four UNC football players, along with Bryce Watts, Javon Terry and Triston Miller, to opt out of the 2020 season. (Photo Source: GoHeels.com, UNC Athletics)

According to the University of North Carolina, three football players have chosen to opt out of the 2020 football season due to concerns with COVID-19: Bryce Watts, DJ Ford and Javon Terry.

All three players are important parts of North Carolina’s defensive secondary. Watts, who played two seasons at Virginia Tech (2017-18), transferred to UNC in June 2019 and took a redshirt for the 2019 season. While at VT, he appeared in 25 games and recorded 29 tackles and an interception.

The 6-foot-2 Terry, who hails from nearby Wake Forest, saw action in all 13 games during his redshirt freshman season; he collected four tackles and a sack, which came against Mercer.

Ford is one of the true veterans of the program; he was a member of North Carolina’s 2016 recruiting class and played in 10 games as a true freshman that year. As a redshirt junior in 2019, Ford played in all 13 games (7 starts) and compiled 54 tackles (2.5 for loss), one interception and one fumble recovery.

UNC’s Bryce Watts, Javon Terry and D.J. Ford have all opted out of the season, according to a team spokesman.

This makes four total North Carolina players that have opted out of the 2020 season; on Thursday, offensive lineman Triston Miller opted out for “family reasons.” Miller is a redshirt freshman who spent the 2019 season on North Carolina’s practice squad. Initially an NC State commit, Miller flipped to UNC in Dec. 2018, weeks after Mack Brown was hired.

Miller won’t play this season due to family reasons, according to UNC.

Earlier this week, the NCAA’s Board of Directors passed updated guidelines that are designed to protect college athletes during the COVID-19 pandemic.

UNC Athletics faced with a potential $52 million loss in revenue