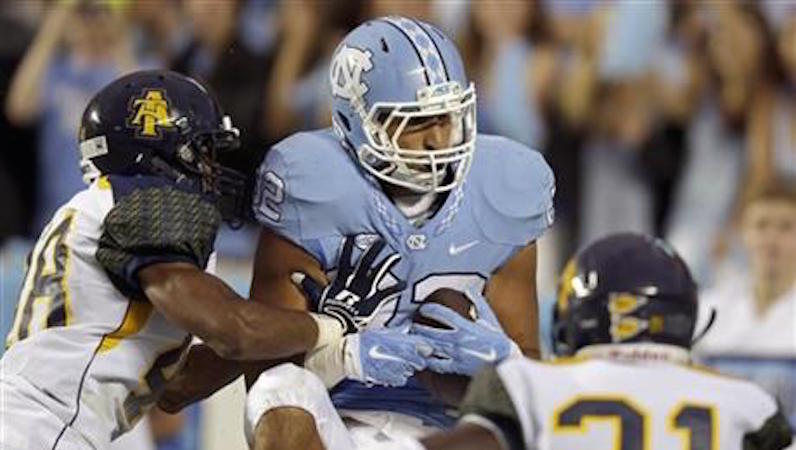 As Brandon Harris steps in as UNC’s quarterback this summer, the coaching staff wants to see tight ends Brandon Fritts and Carl Tucker step up.

Fritts and Tucker didn’t record a lot of catches last season, but the pair combine playmaking ability with game experience. With UNC’s passing game decimated due to graduations and early NFL departures, Harris and the Tar Heels need Fritts and Tucker to become more involved.

Last season, the Tar Heels didn’t heavily employ their tight ends. With five senior pass catchers, including receivers Ryan Switzer, Bug Howard, and Mack Hollins, as well as running backs Elijah Hood and T.J. Logan, there weren’t many balls to go around to other players. Switzer, Howard, Hollins, Hood, and Logan combined for 219 of UNC’s 313 receptions on the year.

Although Fritts and Tucker combined to make just 15 catches for 239 yards in 2016, both showed flashes of brilliance.

Four of Tucker’s nine receptions were for 12 or more yards, including the biggest play of his college career thus far. In UNC’s 28-27 setback to Duke in November, Tucker recorded a 54-yard touchdown reception, which briefly gave the Tar Heels a 21-14 lead in the second quarter.

Tucker is in the mold of former UNC standout Eric Ebron — a large, athletic body who can run routes that traditional wide receivers run. With his length and quickness, Tucker can be a matchup nightmare for slower, smaller linebackers and defensive backs.

Brandon Fritts’ numbers went down from 2015 to 2016. He went from 16 catches for 203 yards and four touchdowns as a freshman, to just six catches for 59 yards as a sophomore. It can largely be attributed to an ankle injury Fritts suffered in the season opener against Georgia. The injury forced Fritts to miss four games, as well as parts of two others.

Three of Fritts’ grabs in 2016 were for 12 or more yards. He had a 23-yard catch against Georgia Tech, and a 19-yard touchdown reception against The Citadel.

The Tar Heels return senior receivers Austin Proehl and Thomas Jackson this season. They also return sophomore Juval Mollette, who is eager to enter the rotation.

But with Carl Tucker and Brandon Fritts both healthy this summer, and so much talent gone from last season’s UNC offense, both tight ends will have a chance to make significant impacts. And with two capable veterans, the Tar Heel offensive staff may have no choice but to pay more attention to their tight ends this fall.

Larry Fedora on Trubisky: “No one knew he was gonna blow up like he did”