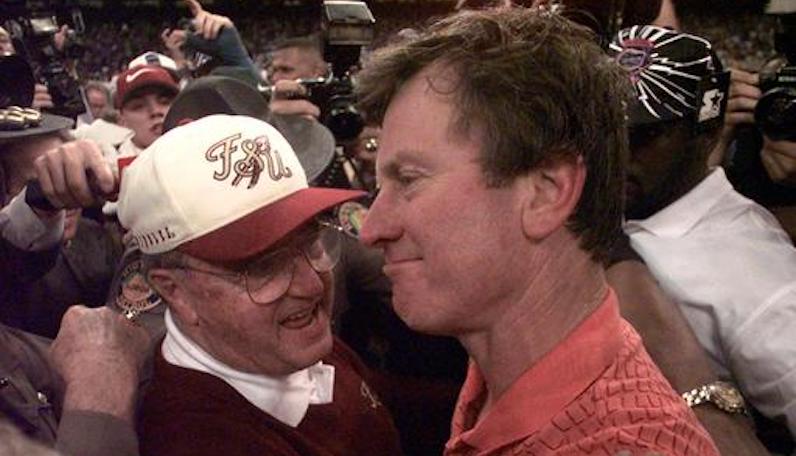 In this Jan. 2, 1997, file photo, Florida State Seminoles coach Bobby Bowden, left, congratulates Florida Gators coach Steve Spurrier after the Gators won 52-20 in the Sugar Bowl at the Superdome in New Orleans. The Gators and Seminoles met 12 times during the 1990's and the lowest ranking either team entered the game with was No. 11. (AP Photo/Dave Martin, File)

Bobby Bowden, one of the giants of modern college football and the ACC, passed away on Sunday at the age of 91. Bowden, of course, is synonymous with the Florida State football program, which he was the head coach of for 34 years.

In total, Bowden was a head coach in college football for 44 seasons; his teams are recognized as having won 357 games, second most all time. During his time at FSU, Bowden won two national championships (1993 and 1999) and 12 ACC title, while leading the program to 14 consecutive top 5 rankings in the final AP Poll, an astonishing feat, and 28 consecutive bowl games.

After going 5-6 during the 1976 season, Bowden would never post a single-season losing record again at FSU.

Bowden’s teams dominated the ACC when Florida State joined the league for the 1992 season. FSU won the league in nine consecutive seasons (1992-2000). Florida State didn’t lose a conference game until the 1995 season.

Today we lost a legend but you never lose a legacy. Rest In Peace Coach Bowden pic.twitter.com/f7pQpUPqbJ

Bowden spent time as an assistant coach at Samford (1954-55), where he also played quarterback and running back in college (1949-52), too. Bowden transferred to Samford after one season at Alabama (1948).

Back in July, Bowden was diagnosed with a terminal medical condition. At the time, he didn’t disclose what the condition was at the time, although Terry — now the head coach at Louisiana-Monroe — later informed the media that it was pancreatic cancer.