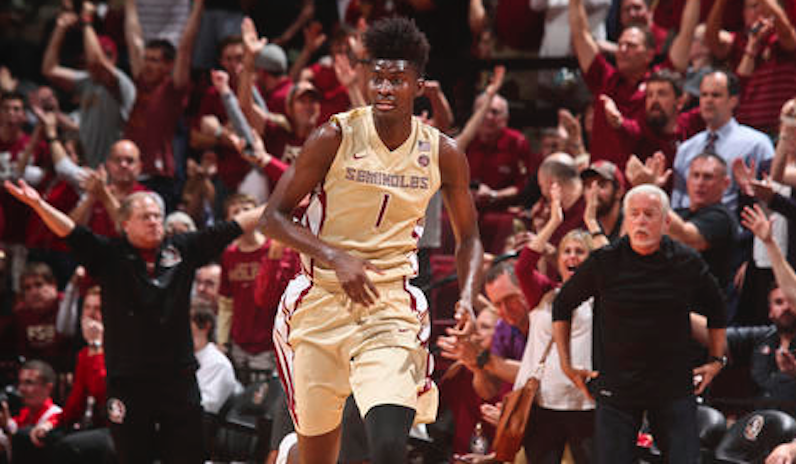 Jonathan Isaac is proving to be one of the nation's top freshmen this season. (AP Photo)

The argument could made that the ACC is as strong a basketball conference as it has ever been. The same could be true for Florida State — at least under head coach Leonard Hamilton.

On Wednesday night, the No. 10 Seminoles improved to 17-2 overall (5-1 ACC) after taking down No. 15 Notre Dame — the last undefeated team in conference play. FSU has five victories over currently ranked teams and is ranked in the Top 10 for the first time in nearly a quarter century.

There are legitimate hopes that this could be the best FSU team since the 1972 squad that lost to UCLA in the national championship. It could certainly be Hamilton’s best. However, that title, for now, belongs to the 2011-12 squad that won the school’s only ACC title.

So, how would that team fare against this one? We’ll examine how the 2012 Seminoles and the current team might match up.

Much like the current team, Florida State was a big squad during the 2011-12 season with three players standing at least 6-10. FSU was also extremely deep with 10 players averaging at least 10 minutes per game. Michael Snaer was the team’s leading scorer and one of the most clutch players in FSU history while Bernard James, a former Air Force sergeant, was one of the feel-good stories in college basketball, averaging nearly 11 points and eight rebounds per game at the age of 27. While the team was long and athletic, FSU’s strength was on the defensive end.

The guard matchup would be an intriguing one. It wasn’t uncommon for Florida State to play three guards during the 2011-12 season with Luke Loucks, a 6-5 facilitator, the team’s best player in Snaer and sharpshooter Deividas Dulkys, who also happened to be a respected on-ball defender. Ian Miller was instant offense off the bench, while Jeff Peterson brought a veteran presence to play behind Loucks.

The current team features a bigger group of guards, headlined by 6-7 sophomore Dwayne Bacon. Xavier Rathan-Mayes (6-4) is a much more prolific scorer than Loucks was and perhaps a better distributor. Terance Mann fills up the box score for Hamilton’s team, while freshmen C.J. Walker and Trent Forrest bring energy off the bench. In terms of instant offense, that role belongs to volume shooter P.J. Savoy.

The winner of this matchup would likely be determined by tempo. The 2012 team would look to slow things down while the current squad prefers to run. While the starting trio from the 2011-12 season was very good, the current backcourt is deeper, more athletic and more versatile. Virginia successfully slowed FSU down earlier this season, but the Seminoles still won.

The 2011-12 team had a three-headed monster to throw at opponents in James, 6-11 Xavier Gibson and 7-footer Jon Kreft. James was a tremendous shot-blocker who could score inside. Kreft was more of the enforcer type, while Gibson had impressive range for a player his size. A young Okaro White brought athleticism and range off the bench.

Jonathan Isaac, a 6-10 high school All-American, headlines the FSU frontcourt, averaging 13.1 points and 7.7 rebounds per game while shooting 54 percent from the floor. He’s also a walking mismatch. Christ Koumadje, a 7-4 sophomore, and 7-1 graduate Michael Ojo have made tremendous strides this season for Florida State. Adding range and depth on the block for FSU is senior forward Jarquez Smith and Phil Cofer, a redshirt sophomore.

Though this season’s squad is bigger, the 2011-12 group was tougher inside. James would have held his own against FSU’s current front line, and Gibson would have probably been able to lure the current bigs away from the rim. While Ojo and Koumadje are bigger, few Seminoles have been meaner than Kreft. The one matchup problem for the 2011-12 squad would be Jonathan Isaac. White may have been able to do a decent job on him, but Gibson could probably use his size to make Isaac work defensively on the block. This matchup could go either way, but we’ll go with the muscle.

The bench for the 2011-12 team was a very good one, headlined by guard Ian Miller, who averaged better than 10 points per game. White averaged nearly eight points per contest and was the team’s second-leading rebounder. Peterson brought experience and a high basketball IQ off the bench, while Kreft imposed toughness.

The current squad is actually a little deeper, which looking back is almost hard to believe. Walker and Forrest do a lot of things well, while Koumadje is the team’s leader in blocked shots and field-goal percentage. Savoy has virtually limitless range. Cofer and Smith are a solid duo, and even walk-on Brandon Allen provides meaningful minutes.

When you compare the two benches, this season’s Florida State team has a deeper, more versatile bench. While the 2011-12 roster had an excellent bench that bought valuable time with starters out, the current group of reserves has very little drop-off.

The 2011-12 squad would probably be able to take advantage of the current team’s propensity to start slow and take the early lead perhaps even to the locker room at half. With pace and depth factoring in later, the current team would eventually take control. This one would probably be close throughout, but finding a way to cover both Dwayne Bacon and Jonathan Isaac would be too tough for the 2011-12 squad.