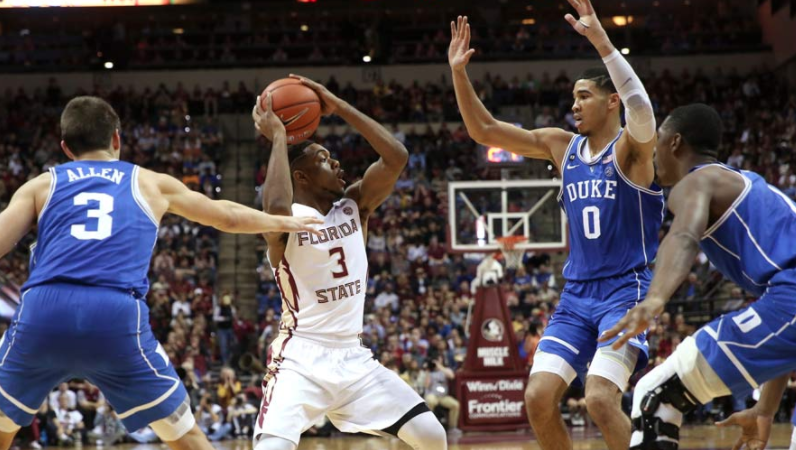 Duke started the season as the nation’s No.1 ranked team, but now faces an uphill climb to just get one of the four No. 1 seeds available for the NCAA Tournament.

The Blue Devils lost three of four games during a rough January stretch, including an ugly home loss to N.C. State; as a result, the team nearly dropped out of the AP Top 25 rankings.

Duke hung together, and entered Thursday night’s contest with North Carolina at No. 18. But even after the 86-78 win over the Tar Heels, Duke’s 19-5 record is good for the No. 4 seed line on Jerry Palm’s latest bracket projection on cbssports.com.

That’s a long way from where Duke thought it would be. Last summer, the belief was: Duke would have a No. 1 seed, and start its NCAA Tournament run nearby at the Greensboro Coliseum.

But the NCAA relocated those early round games to Greenville, S.C., because of North Carolina’s controversial HB2 law that is seen as discriminatory toward the LGBTQ communities.

Duke’s play on the court — losses to Kansas, Virginia Tech, Florida State, Louisville and N.C. State — knocked it low enough in bracket projections that it currently hasn’t earned the protection of getting to play close to home.

But there’s still plenty of time for Duke to climb back up the seed lines thanks to the rugged ACC schedule.

Duke’s final seven regular-season games include one more showdown with North Carolina, a road game at Virginia and a home game with Florida State.

Duke is No. 14 in the KenPom rankings. Those three teams are all in front of the Blue Devils. The team with the worst Kenpom.com ranking remaining on Duke’s schedule is Syracuse at No. 47. The Blue Devils play at Syracuse on Feb. 22. Duke also has a road game at No. 40 Miami on Feb. 25.

And these games are all in addition to the ACC Tournament, where Duke would have the opportunity to add a couple of more wins to its resume. The Blue Devils are helped because their only bad loss is N.C. State, which is currently No. 92 in KenPom. Virginia Tech at No. 54 is the only other loss above the KenPom Top 50.

To get back to a No. 1 seed, Duke would have to pretty much win out, perhaps even winning the ACC Tournament. But Duke can certainly still get back up to the No. 3 seed line with a few big wins. A No. 2 seed isn’t out of the question either if the Blue Devils continue to play as they have in this four-game winning streak.