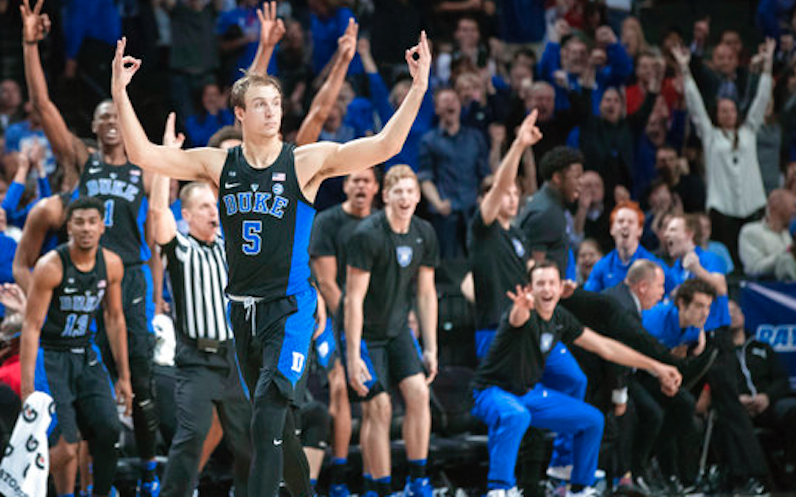 It’s not even April, and many of Duke’s top players are already under a spotlight shined by NBA scouts.

Jayson Tatum arrived at Duke last summer with one-and-done intentions, and all he’ll likely follow through on them. The 6-8 forward, averaging 16 points per game, is projected as the No. 4 overall pick by DraftExpress.

When the season started, fellow freshmen Harry Giles and Marques Bolden also projected as first-rounders. But a new name is on the board as college basketball’s most important month has arrived.

Sophomore Luke Kennard now projects as the No. 20 overall pick of the first round by DraftExpress. The 6-5 guard leads the Devils with 20 PPG and has been a consistent perimeter scorer all season.

In Duke’s semifinal win over Louisville at the ACC Tournament in Brooklyn on Thursday, Kennard scored 24 points and left Cardinals coach Rick Pitino impressed about his pro future.

“Sometimes I look at rankings,” Pitino said, “and I can tell you from spending eight years in the pros that what you see on this.net or this.net is not what the general managers are thinking in the pros of who to draft. That’s just saying who the best players are, in their opinion. I’ve always felt he (Kennard) was, from an offensive standpoint, one, two or three best players in the country because he really knows how to play the game of basketball. He really head fakes well. He passes well, and has great feel for the game, and he’s a great foul shooter as well.”

Kennard’s jump in play is striking, from a reserve in October to one of the ACC’s top players.

But will Kennard continue his career in the NBA next season or stay at Duke?