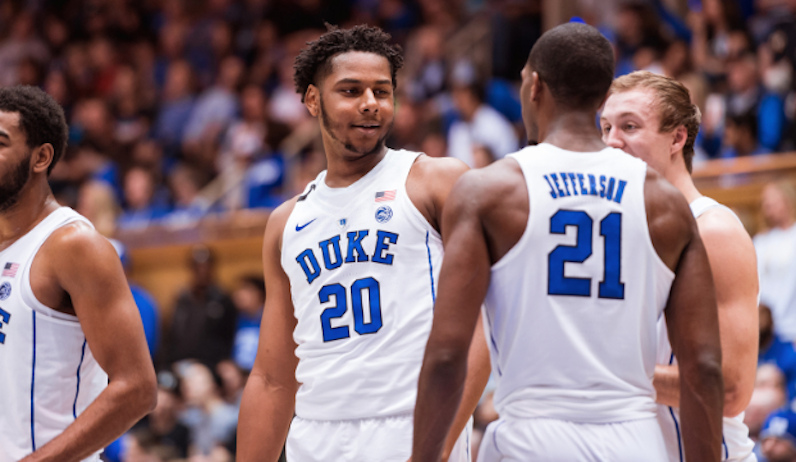 The fact that Mohamed Bamba has long been considered a likely Kentucky commit makes Marques Bolden’s decision to stay at Duke even more important.

After originally coming to Duke with one-and-done intentions, he’d been considering continuing his career at another school. At the same time, Duke has a scholarship offer out to Bamba; the 6-11 McDonald’s All-American is a 5-star recruit in his own right.

Had Bolden followed Amile Jefferson, Chase Jeter and Harry Giles out of the Duke program, the Blue Devils would have been incredibly thin in the post.

Now, that’s not as crucial.

“Despite rumors about my future that have circulated in recent days, I’m excited to announce that I’ll be returning to Duke for my sophomore year,” Bolden said in a statement Monday night. “I have unbelievable support from my family, teammates and coaches.”

Duke’s top big man from this past season, 6-9 forward Amile Jefferson, was a senior. The 6-11 Giles, despite injury problems of his own, has already declared for the NBA Draft and is hiring an agent.

The 6-10 Jeter, after two seasons as a reserve, is transferring.

Though Duke has already signed 6-10 big man Wendell Carter for next season, the Devils needed more in the post. Bolden has the potential to be that even if Bamba signs with Kentucky.

Duke coach Mike Krzyzewski said in a statement: “We’re thrilled that Marques will continue to be part of our program. In addition to being a talented basketball player, he’s an outstanding young man from a great family. It’s unfortunate that his freshman season was impacted by injury, but he has an opportunity to have a great summer and a special sophomore season.”

READ MORE: 4 reasons why Luke Kennard should go to the NBA