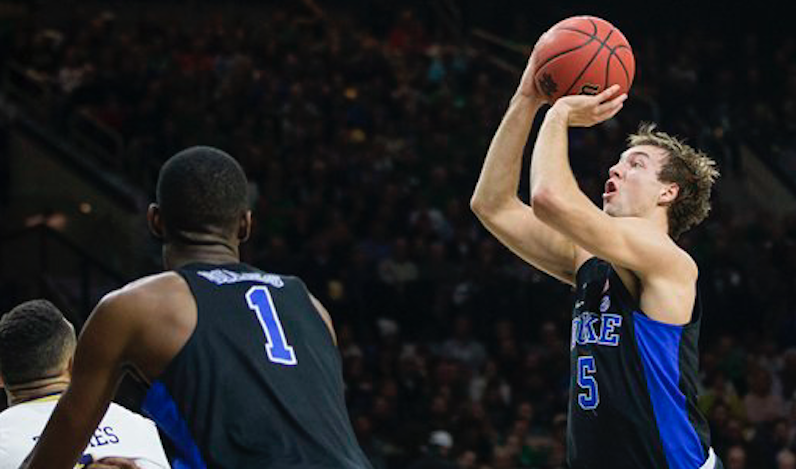 One of college basketball’s breakout stars and a consensus All-American in 2017, Duke sophomore Luke Kennard will enter the upcoming NBA Draft. He will sign with an agent and forgo his remaining college eligibility.

Kennard, a consensus second-team All-American, led Duke in scoring with an average of 19.5 points per game while shooting .489 from the floor, .438 from outside the arc and .856 from the free throw line. His 722 total points on the year represented the 16th-best single-season total in program history, while his .438 three-point percentage ranked 10th on Duke’s single-season chart.

“After considerable reflection, prayer and consultation with my family and coaches, I have decided to take the next step in pursuing my basketball dreams by entering the NBA Draft,” Kennard said. “Being a member of the Duke Basketball brotherhood is always going to be special to me. I have nothing but love and respect for everyone in the Duke program. I want to thank my coaches, teammates, the best fans in the game and everyone in Franklin for being by my side every step of this journey. I have a lot of hard work ahead of me, but I’m confident that I’m ready and have a great foundation for success at the NBA level.”

He made at least one three-point field goal in 40 consecutive games, the second-longest streak in Duke history and the 10th-longest stretch in ACC history.

Kennard eclipsed the 1,000-point mark for his career on Feb. 25 at Miami, becoming just the 12th Duke player (and fifth under Coach K) to hit that milestone prior to the end of his second season. His 1,147 career points were the fourth-most in Duke history by a player in his first two seasons, trailing only Jason Williams (1,333), Art Heyman (1,237) and Johnny Dawkins (1,165).

“I’ve loved coaching Luke and having he and his family in our program,” Duke head coach Mike Krzyzewski said. “Luke’s skill set is such a perfect fit for the way the NBA game has evolved and we’re all excited to see him flourish at the next level. He is a wonderful person who will immediately be an asset to an NBA team.”

Kennard was the only unanimous choice for first-team All-ACC honors in 2017 and was also a first-team NABC All-District 2 member and an All-District III selection by the USBWA. He was named a member of the John R. Wooden Award All-America Team and a final-five candidate for the Jerry West Shooting Guard of the Year Award.

Kennard was selected MVP of the ACC Tournament after averaging 20.0 points and 5.3 rebounds to help Duke become the first team in league history to win four games in as many days to claim the ACC championship.