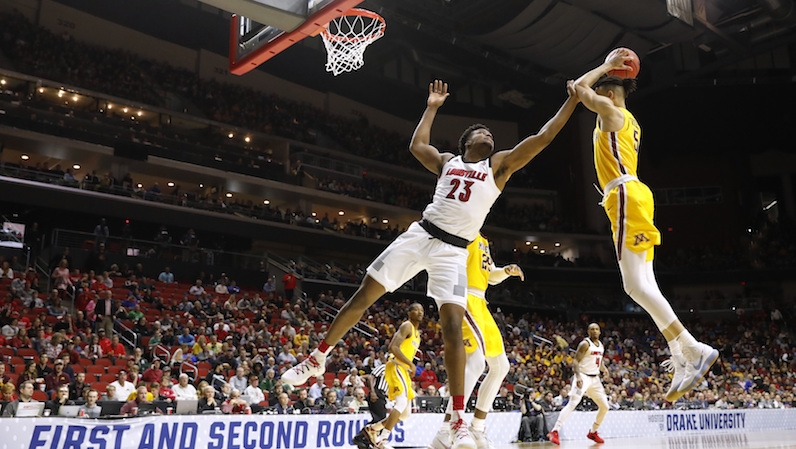 The 2019 NCAA Tournament will be a short ride for Louisville. In the Thursday opener, No. 7 Louisville fell to No. 10 Minnesota, 86-76. Chris Mack ends his first season with the Cardinals at 20-14, which drops the ACC to 0-1 in the NCAA Tournament.

FINAL: Minnesota 86, Louisville 76. Minnesota led by as many as 19 and held off a late Louisville rally to advance. Louisville's season finishes in Des Moines. Chris Mack's first team went 20-14.

As expected, Minnesota got to its post game, too — attacking Louisville’s switching defense. Daniel Oturu and Jordan Murphy combined for 31 points on 12-of-20 shooting.

Louisville, on the other hand, had to deal with a power outage from one of its key players: Dwayne Sutton. The redshirt junior scored just three points on 1-of-7 shooting (0-of-6 3PA).

Jordan Nwora, Louisville’s leading scorer, scored in double figures for the 31st time this season: 10 points (2-of-4 3PA). He also added 11 rebounds. No one drove more offense today for Louisville than veteran guard Christen Cunningham, though.

It's been in a losing effort, but Christen Cunningham is doing his darnedest to keep Louisville scoring here.

In his final collegiate game, Cunningham was a perfect 13-of-13 from the free throw line; he scored 22 points and handed out four assists.

In theory, the 2019-20 Louisville Cardinals should return plenty of this season’s production. Grad transfer Christen Cunningham, a major player for the Cards this season, and Khwan Fore will depart; an NBA decision likely looms for Jordan Nwora, too.

Louisville has a massive six-player class signed for next season, which ranks inside the top 10 nationally, led by top-50 commits Samuell Williamson and Aidan Igiehon. It will be interesting to see how parts of the roster shakeout, especially Nwora.