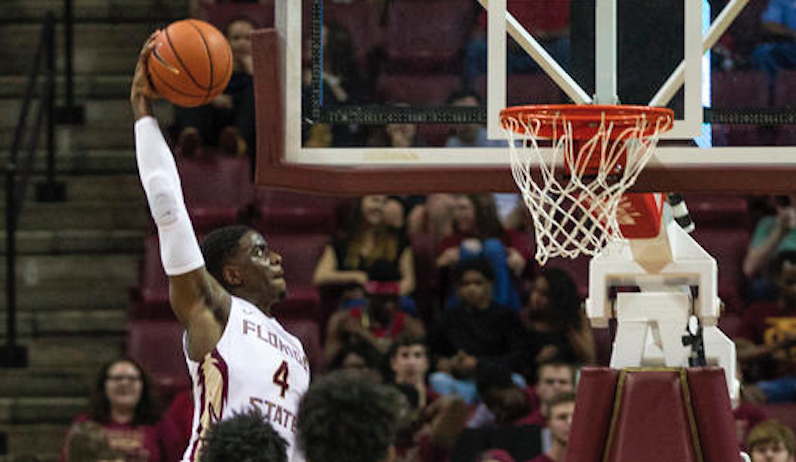 Dwayne Bacon and Florida State are aiming for one of the top four seeds in the ACC Tournament. (AP Photo)

The race for a double-bye in the ACC Tournament is certainly an interesting one.

North Carolina has clinched the top seed in next week’s conference tournament in Brooklyn. But behind the Tar Heels are five teams within one game of one another competing for the next three spots.

Perhaps the biggest surprise among them is Florida State. Following a thrilling 76-74 win at Clemson on Saturday, the Seminoles are tied for the second-best record in conference play at 11-5 with Louisville and Notre Dame. If the ACC Tournament started today, however, FSU would be the No. 2 seed by way of a tiebreaker.

The final two games for Florida State come against teams currently seeded fifth and sixth in the ACC. Those teams are the Duke Blue Devils, whom the Seminoles will visit on Tuesday, and Miami, whom FSU will host on Saturday.

The good news for Florida State is that it has already beaten both of those teams this season and needs just one win in its final two regular-season games to secure a bye. Both teams are 10-6 in ACC play and a game behind FSU.

If the Seminoles drop both games, either Notre Dame or Louisville would have to do the same for FSU to start the tournament on Thursday in the quarterfinal.

Earning a double-bye would not only make Florida State’s venture through the ACC Tournament easier, but it would probably cement the Seminoles’ NCAA Tournament spot in Orlando. This may not be true if FSU limped in with consecutive losses, but if the Seminoles split the final two regular-season games and earned a top-four seed in Brooklyn, it’s hard to envision FSU playing the opening weekend of the Big Dance in any place other than Orlando.

In a bracket projection released by USA Today on Sunday, FSU was a No. 2 seed. CBS Sports currently has FSU listed as a No. 3.

Not having to play in either of the first two rounds of the ACC Tournament would greatly hinder the chances of FSU suffering a debilitating loss that could drastically affect the Seminoles’ NCAA seed. For FSU to suffer a bad loss in the ACC Tournament with a double-bye, one of the conference’s bottom-feeders would have to pull off two upsets just to get to the Seminoles.

With two good teams remaining on the slate for Florida State, getting a double-bye in the ACC Tournament is far from a sure thing. That, however, could be clinched with just one win. If that happens, FSU fans can start planning a short mid-March trip from Tallahassee to Orlando.