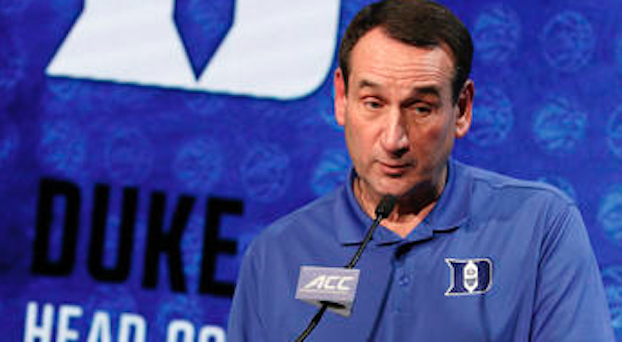 Mike Krzyzewski was not caught off guard by Sean Obi's decision to leave Duke. (AP Photo)

Junior forward Sean Obi will transfer out of Duke at the end of the 2017 spring semester, school officials announced Tuesday. Obi is expected to graduate from Duke and be immediately eligible at another institution.

“This was an anticipated decision and we appreciate everything Sean contributed to our program over the last three years,” Duke head coach Mike Krzyzewski said.

“Unfortunately, injuries played a predominant role in his time here. He is now in a much better place physically and we wish him nothing but the best in the next step of his journey.”

A native of Kaduna, Nigeria, Obi transferred to Duke from Rice University prior to the 2014-15 season. He sat out that season per NCAA transfer rules.

Obi played in 10 games in a Duke uniform, averaging 0.5 points and 1.0 rebounds per game. His composite collegiate averages stand at 8.7 PPG and 7.2 RPG in 40 games.

“I have loved my time at Duke,” Obi said. “I’ve struggled with a few injuries but I’ve grown as both a man and a player in this program. The relationships I’ve made here will last a lifetime and I will be extremely proud to call myself a Duke graduate. I’m feeling great physically now and I’m excited to take the next step in my career.”

Duke finished the season with a 28-9 record, making its 22nd consecutive NCAA Tournament appearance. Its season ended with a second-round loss to South Carolina in Greenville, S.C. Before that, the Blue Devils made history at the ACC Tournament in Brooklyn, becoming the first team ever to win four games in as many days to capture the league crown. Duke has won a record 20 ACC Tournament titles, including 14 under Coach K — the most in league history by a coach. It was the program’s first conference championship since 2011.

READ MORE: 3 reasons why it would make sense for Harry Giles to go pro