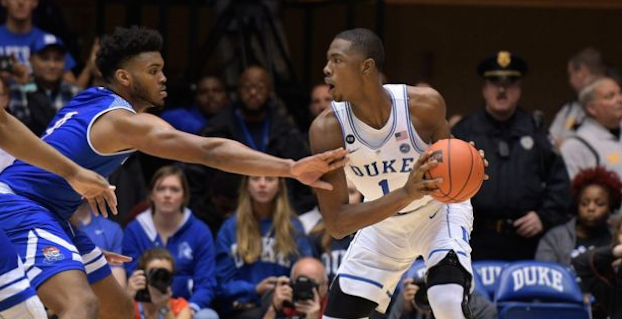 Jayson Tatum, Harry Giles and Marques Bolden missed all of November’s games while recovering from foot and knee injuries. They’ve all returned to the Blue Devils’ rotation this month, and they can be found listed in DraftExpress.com’s NBA first-round mock draft.

Tatum, a rangy 6-8 forward, is averaging 15.4 points and 7.6 rebounds through the first five games of his college career. He’s started three times.

DraftExpress has Tatum as the No. 6 prospect in the draft if he decides, as expected, to leave Duke after just one season. Tatum suffered a sprained foot in practice at Duke on Oct. 25 which caused him to miss the Blue Devils’ first eight games.

But he’s recovered well and has logged 27.8 minutes per outing over his five games for Duke. His ability to handle the ball, shoot and guard on the perimeter, while also crashing the boards and scoring inside, have him in high demand by NBA team representatives.

After recovering from arthroscopic surgery on his left knee last October, 6-11 Harry Giles has yet to play anywhere near the level of his full talents. Giles missed Duke’s first 11 games and has played just 10 minutes in his two college games.

Still, DraftExpress has Giles slotted at the bottom of the draft lottery at No. 13. Having not played during his senior year of high school after suffering a torn ACL, it’s expected that Giles will need a few more weeks to be able to contribute more for the Blue Devils.

As he gets into shape and shows more of his all-around talents, look for Giles to shoot back up the draft projections and into the top 10.

Duke’s third once-hobbled freshman who has returned to play, Marques Bolden, is at No. 16 in the DraftExpress rankings. The 6-11, 250-pound Bolden dealt with a left foot problem that kept him out of Duke’s early games. Bolden has played five games since his return but is averaging just 2.6 PPG and 1.2 RPG.

Bolden sat out of practice and games for five weeks while his foot healed. He’s averaged just 7.2 minutes per game and, so far, has been a step slow.

Duke’s fourth projected first-round pick is Grayson Allen, who is at No. 27 on DraftExpress. Allen, a 6-4 junior and preseason All-American selection, is averaging 16 points per game for Duke. He’s also currently suspended from games indefinitely after tripping an Elon player during a Dec. 21 contest in Greensboro.

Allen needs to play, and stay under control emotionally, to show he’s capable of moving up the draft chart. But only Krzyzewski, who announced the suspension on Dec. 22, knows how long Allen will be out.