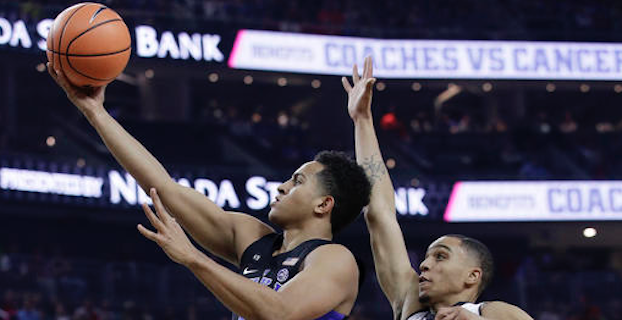 Krzyzewski called the act “unacceptable,” and Allen apologized in person to Santa Ana and Elon coach Matt Matheny after the game.

This being the third time Allen has been caught doing this in his last 25 games, Krzyzewski and Duke athletics director Kevin White decided the suspension was necessary.

The school didn’t specify how long the suspension would last. But since it was worded as a suspension from competition, it’s pretty clear that Allen will miss one game at least.

So that means Duke (12-1) will be without a starting guard who averages 16 points and plays 31 minutes per game as it begins ACC play.

Fortunately, Duke is armed with a deep, talented roster that should allow it to overcome Allen’s loss for one or two games — however long he’s out.

Freshman guard Frank Jackson started the second half against Elon as Krzyzewski held Allen out following his technical foul and outburst on the bench. With Jackson, Matt Jones and Luke Kennard manning the backcourt, the Blue Devils went on a run that took them from one point down to a double-digit lead.

Allen did play some in the second half as Duke posted a 72-61 win over the Phoenix, but Jackson looked comfortable on the court.

The Blue Devils, even without Allen, have plenty of scoring and defending options. Freshman Jayson Tatum, a 6-8 forward, plays the 4 position but has guard tendencies that make him a matchup problem for opponents.

This month, after Tatum returned from a sprained foot to make his college debut, Krzyzewski has shown a preference to put four perimeter players (including Tatum) with senior forward Amile Jefferson. Even when Allen was available to play, Jackson often took his turn in the rotation.

Jackson has averaged 26.8 minutes per game this season, including five starting assignments. He’s earned Krzyzewski’s trust early in his career.

So, even without Allen, Duke won’t be lacking in firepower on offense. Jones even handles the point guard duties to get the Blue Devils set up in their half-court sets.

Tatum has proven to be effective there, a sign of his athleticism. Jones is Duke’s top perimeter defender, leading the team with 27 steals. Tatum has eight steals in just five games.

Duke’s first week of ACC play isn’t as daunting as the rest of its league schedule. Yes, going on the road to play an improved Virginia Tech squad won’t be easy. But then the Blue Devils have home games with Georgia Tech on Jan. 4 and Boston College on Jan. 7. Based on nonconference play, the Yellow Jackets and Eagles look like they’ll be at the bottom of the league standings once again.

After that, Duke plays back-to-back road games at Florida State and Louisville, so the road will get tougher. But, regardless, Duke is set up to survive in the short term while Allen gets his mind right.