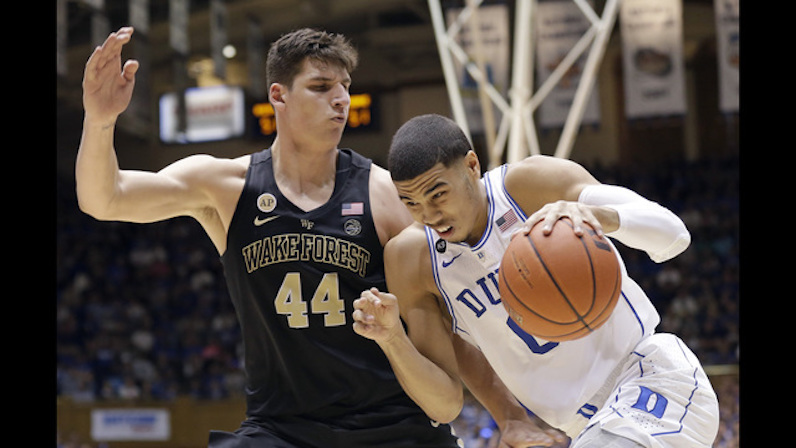 Duke basketball is known for pumping players into the NBA, and Jayson Tatum (right) will continue that tradition. (AP Photo/Gerry Broome)

Duke started last basketball season as the nation’s No. 1 team, and a new banner will appear in Cameron Indoor Stadium when next season begins.

The Blue Devils will produce at least one lottery pick in the NBA Draft for the fourth consecutive year. They figure to pump out three first-round picks in June.

The end of Duke’s season, of course, left its fanbase wanting more. Yes, the Blue Devils won the ACC championship. However, eight days later South Carolina booted them from the NCAA Tournament in the second round.

So the new banner Duke earned for Cameron will commemorate its latest ACC championship — not another Final Four or NCAA championship. Many believe that makes the season a failure.

While that may or may not be accurate, it doesn’t mean the Duke program with three NCAA titles and four Final Four appearances since the turn of the century is slipping in any way.

On NBA Draft night next month, Duke’s iconic logo will be on full display. Jayson Tatum projects to be among the top five picks, just as former Blue Devils Brandon Ingram, Jahlil Okafor and Jabari Parker were in the three previous drafts.

DraftExpress lists guard Luke Kennard and forward Harry Giles as the No. 16 and No. 20 picks, respectively. Freshman Frank Jackson projects as a second-round pick, although that could change; he just underwent foot surgery.

Nevertheless, the number of guys heading to the NBA shows Duke remains a top destination for the best players.

The incoming freshman class supports that notion. That group will be looking to replace all that outgoing talent.

Duke’s recruiting class ranks No. 2 in the country behind only Kentucky, per 247Sports’ composite listings.

Coach Mike Krzyzewski celebrated his 70th birthday last February, but he’s still among the most successful recruiters in his profession.

Because of that recruiting prowess, Duke will once again be ranked among the nation’s top 10 teams when the new season begins. The Blue Devils will be in the running for ACC and NCAA championships, just as they always are.

A stunning loss to a South Carolina team that rolled to the Final Four did nothing to change where Duke stands in college basketball’s hierarchy.

Can Duke lure Marvin Bagley away from the West Coast?