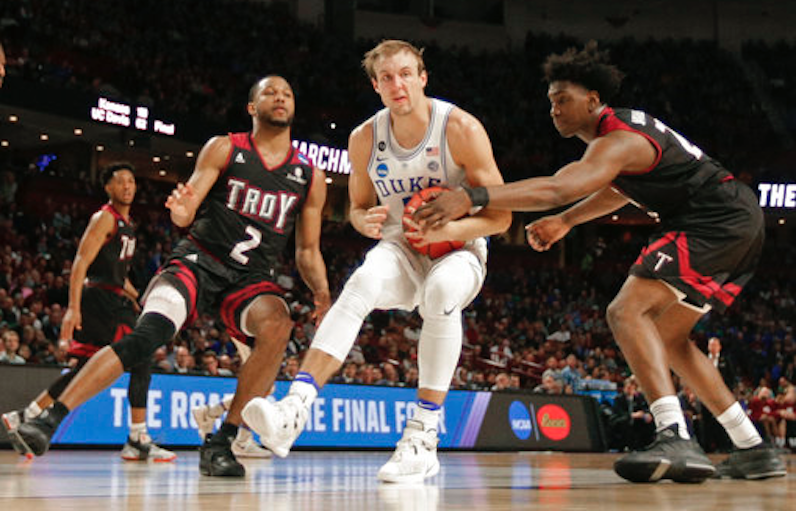 Duke knew it would lose two seniors from its ACC championship team that, surprisingly, bowed out in the NCAA Tournament’s second round last weekend.

In four days following the season-ending loss to South Carolina, two players in addition to seniors Matt Jones and Amile Jefferson have departed the program.

Jayson Tatum announced me was leaving after one season for the NBA. No surprise there.

But 6-10 sophomore Chase Jeter announced Thursday that he is transferring out of the Duke program.

Jeter’s exit wasn’t considered as automatic as Tatum’s. However, after he played just 16 games this season while battling ankle and back injuries, he opted to move on.

That fact raises questions about the team Mike Krzyzewski will have at his disposal for the 2017-18 season.

Incoming freshman Wendell Carter, a 6-11 power forward, is among the top players in the 2017 class. A 5-star recruit, Carter is expected to step in and be a major force in the post as a freshman.

The question is, who will play with — or behind — him?

Harry Giles is likely to join Tatum as Duke freshmen entering this June’s NBA Draft. Even though the 6-10 center played only 11.5 minutes per game after missing the first month of the season following arthroscopic knee surgery, he still projects as a first-round pick.

Marques Bolden arrived at Duke with one-and-done aspirations, too. But he missed the first eight games with a left leg injury and then only played 6.5 minutes per game. If the 6-11 Bolden, who has fallen out of most mock drafts, returns to Duke, he would give the Blue Devils a formidable interior game along with Carter.

Javin DeLaurier was never a factor for Duke as a freshman this season. But the athletic 6-10 forward could force his way into the rotation as a sophomore.

In addition to Tatum and Giles, junior guard Grayson Allen and sophomore guard Luke Kennard are also considering jumping to the NBA. Both are excellent perimeter scorers, so their decisions will influence how strong Duke can be next season.

Even if the Devils don’t secure Duval, Frank Jackson will be in line to run the offense as a sophomore. A backcourt featuring Jackson, Trent and, say, Kennard would have Duke among the ACC’s best.

If Kennard and Allen head to the NBA? Duke will be very young in the backcourt with Jackson, Trent and, maybe, Duval.

Five-star small forward Kevin Knox could also join the mix. A 6-8 recruit, he’s deciding between Duke, North Carolina Kentucky and Florida State. If he comes to Duke, it would give the Blue Devils another rangy wing in the mode of former stars Jabari Parker, Justise Winslow, Brandon Ingram and Tatum.

So Duke could have another great — albeit young — team next season. Or it could have a veteran scorer like Allen or Kennard still in the mix.

Within the next week or so, the picture should become more clear.