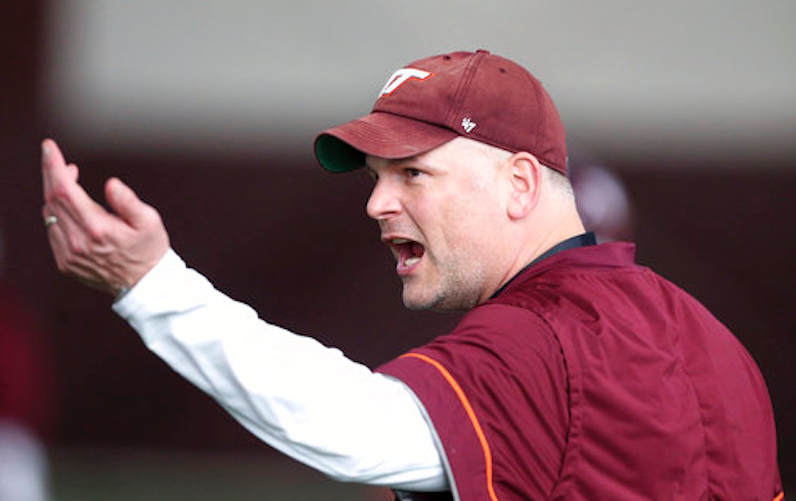 Justin Fuente and his staff re-secured a commitment from 2018 quarterback DeJuan Ellis after a short parting of ways. (AP Photo)

Virginia Tech football fans are oozing with excitement about what the long-term future in Blacksburg holds under reigning ACC Coach of the Year Justin Fuente. Their next recruiting class is shaping up to be ranked in the Top 25 nationally and the Hokies are clearly establishing the type of momentum that they hoped for when hiring Fuente from Memphis.

But what about the immediate future for the 2017 campaign, and in particular, at the position frothed over more than any other in the sport? That’s quarterback.

There’s no question that the QB spot will be the focus of attention as the Hokies prepare for their September 3rd season opener against West Virginia, a more than formidable foe from the Big 12 that finished 10-3 overall last year. It became one of uncertainty once Jerod Evans bolted early for the NFL, something he might be wishing he had to do over considering he went undrafted.

Spring practices did little to distinguish the three candidates: redshirt freshman Josh Jackson, Class of 2017 early enrollee Herndon Hooker and junior college transfer A.J. Bush. Even in conversations with the media, Fuente made sure not show his hand or lean any specific direction with a competition that is up for grabs.

When the dust settles, the guy that most are banking on to win the starting job is Jackson. His advantage is being in the system for a year, whereas the other two don’t. Furthermore, his athleticism is conducive to the pace Fuente wants the offense to play at, plus he’s arguably the most effective player that they have to orchestrate the read-option that’s such an integral part of the Hokies attack.

Bush, who played at Nebraska prior to a junior college stint, will have to prove he can be a judicious decision-maker on the big stage. At Council Bluffs Iowa Western Community College while splitting time as the starter, he had more interceptions than touchdown passes and completed less than 50% of his passes. He does possess valuable game experience and can throw the ball down the football vertically with success, so a chance to go from backup to eventual starter certainly exists.

Given that it is extremely rare for true freshmen to take the reins of a high-profile program in game one behind center, it’s conceivable that Hooker redshirts, potentially leaving walk-ons Jack Click and Chase Mummau to battle it out for the third-string spot. That would allow Hooker to further mature, develop and grasp the system while positioning himself to possibly win the job in 2018, depending on how Jackson and/or Bush perform this year.

Whoever is passing the football for the Hokies will benefit greatly from having perhaps the best senior wideout in the conference in Cam Phillips, who had 76 receptions for 983 yards and five touchdowns a season ago. Phillips should be even more of the focal point with Bucky Hodges and Isaiah Ford having moved on to the NFL.