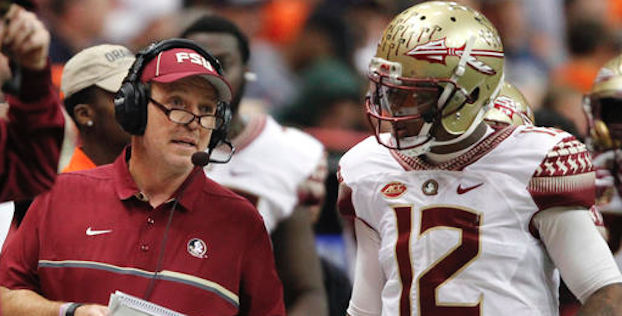 Deondre Francois (12) is the front-runner to win ACC Offensive Rookie of the Year honors. (AP Photo)

Florida State freshman quarterback Deondre Francois hit the 300-yard passing mark for the fifth time this season on Saturday, throwing for 315 yards and a pair of scores in a 45-14 victory at Syracuse.

Coming into the year, Francois was hyped as the potential starter following a stellar spring. He not only ousted injury-plagued senior Sean Maguire for the starting job, but won over his teammates.

Francois has displayed toughness, resiliency and quiet leadership throughout the season. With one game remaining against rival Florida, he has completed 61 percent of his passes for nearly 3,000 yards. The redshirt freshman has also accounted for 20 total touchdowns compared to five interceptions.

For the most part, Francois’ rookie campaign has been a success. It has the Seminoles poised for a bright future under center, but it doesn’t necessarily mean he is a lock to be the long-term starter.

Become a premium member of ACCSports.com to see the rest of the story!