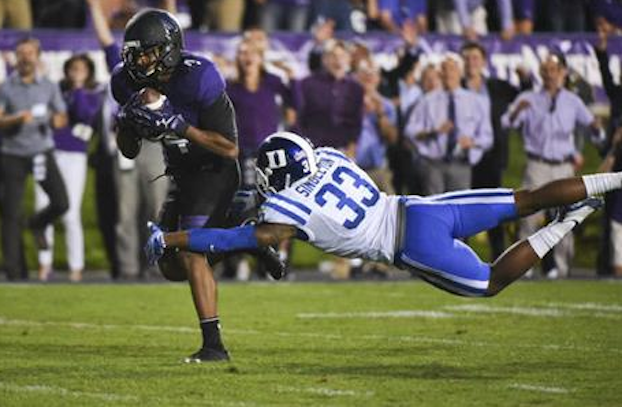 Duke is now 1-2 following their loss on the road at Northwestern. (AP Photo).

After opening their 2016 season with an easy victory at home over crosstown opponent NC Central, Duke has dropped two straight games — Wake Forest and Northwestern — and things haven’t exactly looked smooth, especially on offense. The Blue Devils are currently averaging just 25.3 points per game — a serious decline over previous seasons — and that’s taking into account the 49 points they laid on NCCU opening week. Against the Demon Deacons and Wildcats, they’ve mustered just 27 combined points.

Running the ball has been a serious problem for the Blue Devils. Jela Duncan’s numbers — 193 yards, 5.5 yards per cary and three touchdowns — appear good on the surface, but that’s not telling the entire story. The offensive line is having a great deal of trouble blocking for their top two running backs: Duncan and Shaun Wilson. According to Bill Connelly of SB Nation, Duncan currently has an opportunity rate of just 34.3 percent, which means it’s been tough sledding for the senior back to catch much daylight before being met with a host of defenders. It’s been even worse, though, for Wilson, who has an opportunity rate of 15.8 percent.

Opportunity rate is the percentage of carries in which the offensive line produces at least five yards of rushing for the back, per Football Study Hall. Duke’s offense, especially with a redshirt freshman at quarterback, needs the ground game to catch up. They’re currently averaging just 1.07 yards per isolate rushing play, which isn’t going to cut it if they’re going to make their fifth-straight bowl appearance.

To read more on Duke’s struggling ground game and record in one-score games, sign up for basic access to ACCSports.com.