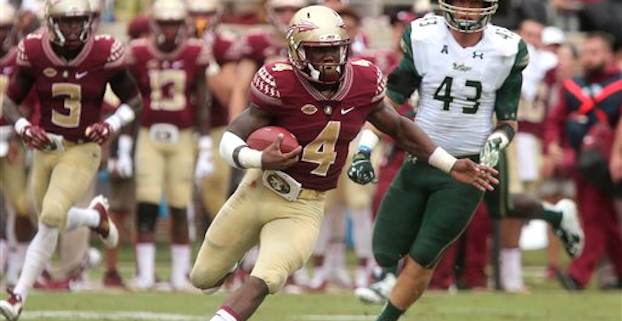 After making the trip to New York as a Heisman Trophy finalist in 2015, Clemson quarterback Deshaun Watson will enter this season as an obvious candidate to win college football’s most prestigious individual award this December.

He might not be the only ACC player with a realistic shot, though.

An easy argument could’ve been made last year that Florida State running back Dalvin Cook was deserving of more Heisman consideration. The Miami native finished seventh in the voting as a sophomore and wasn’t among the players to get an invite to New York.

Frankly, Cook was outstanding last fall. Not only did he break a single-season school record with 1,691 rushing yards, but he also rumbled his way to 19 touchdowns on the ground and another score off a reception. In total, he logged eight 100-yard games and two 200-yard outings, including a 266-yard, three-touchdown effort against South Florida.

The fact that Cook averaged 7.38 yards per carry — a significantly higher average than Heisman winner Derrick Henry (5.62) and finalist Christian McCaffrey (5.99) — running behind a shaky offensive line is a major reason why he was in the discussion for the award. The fact that he did all of that while injured most of the year provides reason to believe he can be even better this season.

Cook battled hamstring issues most of the year. He left the game at Wake Forest after only two carries and sat out all of the Seminoles’ contest against Syracuse.

If he’s 100 percent this season, he could do even more damage.

Which of Florida State’s 2016 opponents could be vulnerable against the Seminoles’ run game? Find out for free by signing up for basic access to ACCSports.com.