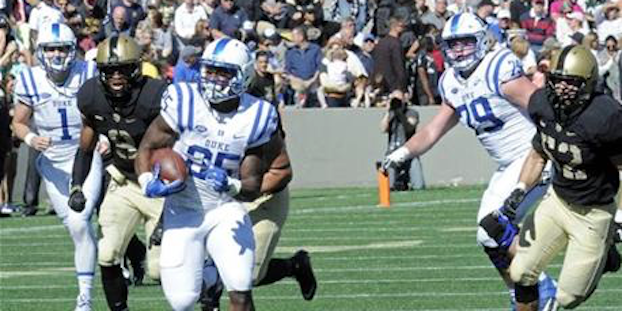 Jela Duncan is expected to be back on the field for Duke this Saturday. (AP Photo).

It hasn’t been confirmed just yet, but all signs point to positive that Duke’s senior running back Jela Duncan will return this weekend for their match-up against Army. This comes after he missed the team’s game against Virginia, which Duke lost, due to a leg injury.

This is obviously good news for the Blue Devils, who head into this out of conference game with a record of 2-3 on the season. A victory would be critical for Duke as they look to keep their hopes of playing in a fifth-consecutive bowl game alive; following their contest against the Black Knights, three of their next four game are against top 25 teams, including a road trip to play Lamar Jackson and Louisville.

According to the team’s practice report from Thursday, Duncan is listed as probable for Saturday’s game. Duke will look to get back to .500 on the season, and a healthy Duncan would be a big boon toward that goal.