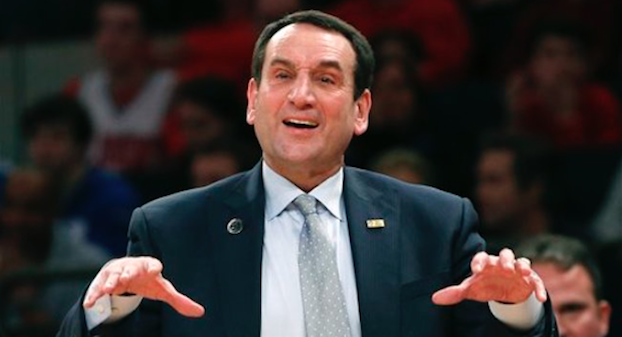 It goes without saying that North Carolina and Duke are two of the five or so greatest programs in the history of college basketball. By every single metic — win totals, conference and national championships, players put into the NBA, whatever — these two schools, led by their historic coaches, have been dominant.

Under the guidance of coach Mike Krzyzewski, Duke basketball has become synonymous with tenacious defense (he’s known for naming several of his family’s dogs after different defensive actions). The Blue Devils almost never play zone; they guard you man-to-man, and are in their opponent’s jersey the second the ball crosses half-court. But Duke doesn’t get things done on just the defensive end. They aren’t the 2015 Denver Broncos. An emphasis on shooting threes and a willingness to play small (maximizing the amount of shooting, skill on the court) have long been two tenants of the Blue Devils program, and it shows in this data.

The Tar Heels are famous for their desire to run in transition, especially in the secondary break. You have seen this drill a million times. UNC essentially has a patent on this type of break. North Carolina grabs a defensive rebound, and one big man takes off, sprinting the length of the floor, which draws in defenders. The rebounder passes to the point guard, who starts to dash up the court while the two wings fill the perimeter lanes. The second big man, who grabbed the rebound, trails the play. In 2005, Raymond Felton, Sean May and Jawad Williams ran the same action that Ty Lawson, Tyler Hansbrough and Danny Green replicated in 2009. North Carolina wants to leverage their size and athleticism advantages, and this setup allows them to run actions that result in high percentage shots.

Regardless of the system, these two programs invariably feature some of the best players in the nation, which is the lifeblood of any good offense. And my word, have these two teams been prolific in that capacity.

Ken Pomeroy, or KenPom, is the unofficial guru of college basketball statistics, and rightfully so. He’s pioneer of advanced metrics, and he’s helped immeasurably add to the pervasiveness of this valuable information. His publicly-available data dates back to the 2001-02 season; in total, he has 15 seasons worth of numbers. It’s not hard to notice, when tracking back through the numbers, that Duke routinely finds itself atop of the offensive efficiency list — and UNC is usually right there with them. Let’s take a glance at the adjusted-for-pace numbers: