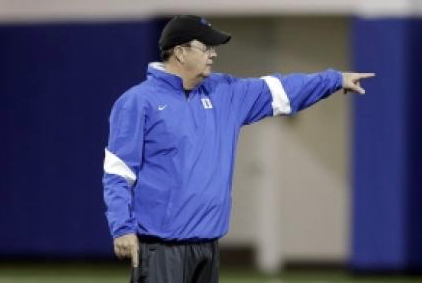 The newest faces made quite an impression for Duke in its season-opening win over N.C. Central last Saturday night.

Because of that, they’ll get more chances to impress the Blue Devils coaching staff.

From redshirt freshmen starters Daniel Jones and Joe Giles-Harris to the eight freshmen who saw play in their first possible game, Duke’s newest players proved a positive infusion of talent to the Blue Devils program.

Jones, Duke’s starting quarterback, completed 10 of 15 passes for 189 yards, throwing for two touchdowns and running for another. Though redshirt junior quarterback Parker Boehme also played well (6 of 8 passing, 1 TD pass plus 68 yards rushing with a TD), Jones is the clear choice to start again this week against Wake Forest.

“We have a starter and we’ve got a back-up,” Duke coach David Cutcliffe said. “It’s not like we’re still trying to figure that out. But I can promise you Parker is a guy that I trust in the game, and particularly in somewhat would be critical situations.”

To read more on the production of Duke’s freshmen for free, sign up for basic access to ACCSports.com.