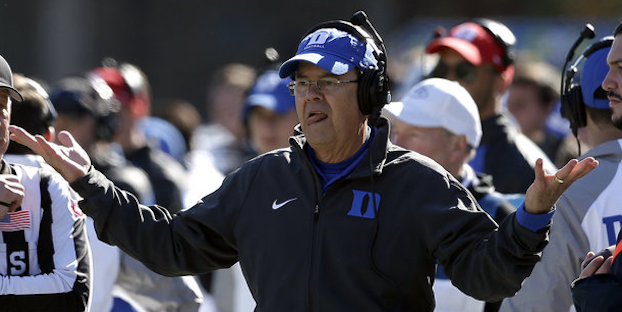 David Cutcliffe has won 50 games during his nine seasons at Duke. (AP Photo).

The journey starts against North Carolina Central on Saturday night at 6 p.m. in expanded Wallace Wade Stadium, which now features luxury suites and a seating capacity of 40,004.

On the field, there are plenty of things to examine as the Blue Devils aim to continue their climb up the ACC football hierarchy under coach David Cutcliffe.

Here are the three most important things to watch:

New quarterback Daniel Jones — The redshirt freshman will play his first collegiate game and, low and behold, he’ll be the starter.

Jones arrived on campus, technically, as a walk-on in summer 2015. He was promised the first scholarship available and he was awarded it before fall classes started. Ever since, he’s impressed Duke’s coaches and his teammates with his strong, accurate arm.

But Cutcliffe and new offensive coordinator Zac Roper are confident Jones gives them the best shot at being successful this season.

“Daniel has a great opportunity in front of him,” Cutcliffe said. “I hope and think he will take advantage of that.”

Duke’s offense, while averaging 31.5 points per game last season, was inconsistent completing passes downfield. Cutcliffe raves about Jones’ arm strength. So watch for how successful — or unsuccessful — Duke is against NCCU on those plays.

To find out the other two critical factors for Duke on Saturday, sign up for basic access to ACCSports.com.