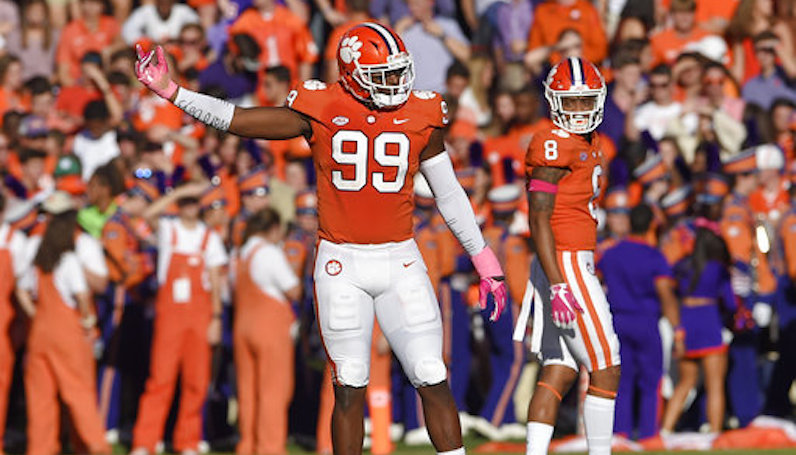 “You come at the king, you best not miss.” It may be a bit of a stretch to apply Omar Little’s transcendent quote from The Wire to an ACC football game, but that’s exactly what we’re doing here. Because NC State went to Death Valley with an opportunity to dethrone the league’s football kingpin. What followed, though, was just a reset of the status quo — Clemson pummeled NC State 41-7.

The result left no doubts: Clemson is the unquestioned gold standard when it comes to football in this conference. Alabama is a war machine, but the Tigers are in a similar stratosphere. Now, to the ACC Football Power Rankings.

Yes, Trevor Lawrence was efficient for Clemson in the win over NC State; however, this victory was piloted by a wonderful defensive effort. Clemson had State off balance all game — holding the Pack to 297 total yards and forcing three turnovers. Within the ACC, it was the third league game this season that a defense has forced three turnovers and held its opponent to under 300 total yards.

Last 2 names on that list are both noteworthy given all the ink spilled over the first three this year.

Next up: at Florida State

Since Ryan Finley arrived at NC State in 2016, the quarterback has only two performances of two or more interceptions and no touchdown passes — both of which came against Clemson. The Pack allowed just one sack, but Finley was under heat and the run game never found traction, either: 104 yards on 32 carries.

What will be interesting now: does NC State allow this disappointing loss to beat them twice, or is it able to rebound on the road?

DD assessing the post 41-7 damage: "They played really well and I don't think we did. I own that."

After an off weekend, the stretch run is about to come fast and furious for Virginia Tech: five games in 29 days, starting with Georgia Tech this Thursday. In 10 games since Paul Johnson arrived at Georgia Tech, the Hokies have held the Yellow Jackets under 250 yards rushing four times — all four times, VT won.

Malik Rosier is back at QB1, and after opening up as a 2.5-point underdog, Miami — after an off week — is back to three-point favorite status over Boston College. Regardless of who’s taking snaps, the Hurricanes need its defense to continue dominating: a defensive line Havoc Rate of 12.7 percent, per Football Study Hall, which leads the FBS.

In the loss to UVA, Duke’s offense once again struggled to get off the ground: 320 total yards two interceptions. Daniel Jones threw for 240 yards on 40 attempts — only six yards per attempt. Duke continues to be ravaged by injuries, too; left tackle Jaylen Miller (ankle) will miss the rest of the 2018 season. He becomes the 11th player with starting experience to miss at least one game this season.

Next up: at Pittsburgh

North Carolina made an abundance of its own mistakes, to put things mildly; but freshman quarterback Tommy DeVito entered the game in relief of Eric Dungey (similar to the FSU win) and helped pull off a stunning comeback victory. DeVito (9.5 yards per pass attempt) was unafraid to go down field, too: three touchdown passes in the fourth quarter or overtime, including two of 25+ yards. Dungey is still the No. 1 quarterback on Syracuse’s depth chart, though.

Andre Cisco bounced back with a big-time performance to land on the National Defense of the Week https://t.co/Rzn8TeMuAn pic.twitter.com/LU8nmNGH5v

Despite missing the last two games, Boston College’s star back A.J. Dillon still ranks second in the ACC in rushing yards, behind only Travis Etienne: 652 yards on 106 carries (6.2 yards per carry). Dillon is questionable for Friday’s game against Miami — one of the top run defenses in the nation.

Florida State’s offense had its moments against porous Wake Forest; however, if FSU is to have any chance against Clemson, Brian Burns must continue to wreck havoc. The veteran rush end collected two more sacks against Wake Forest, which gives him nine for the season — second most in the FBS.

Brian Burns added to his national-leading pressure total with 7 more against Wake Forest on Saturday – he now has 46 total QB pressures this season pic.twitter.com/e0hDK5VsCb

Pittsburgh is coming off its best game of the season — a near upset on the road against half-brother Notre Dame. After a week off, can the the Panther inch a game closer to bowl eligibility against an injured Duke team? Pitt has won three straight over Duke.

Through the first four games of the season, Virginia Tech’s run defense looked solid: 84 yards per game, 2.6 yards per carry. However, against Notre Dame and UNC, things went sideways: 402 yards, 5.7 yards per carry. How will the Hokies hold up against Georgia Tech — the FBS leader in rushing yards and touchdowns?

The Post John Wolford Era isn’t exactly off the a robust start. Freshman Sam Hartman has had some really nice moments, but Wake Forest has lost four of its last five games and is 0-3 in conference games. In the last two games — defeats to Clemson and FSU — Wake has combined to go 33-of-83 through the air — a completion rate just under 40 percent — and averaged four yards per pass attempt.

Next up: at Louisville

Well, things started well for UNC, and the offense had moments. The Tar Heels put up 500 total yards against Syracuse; Nathan Elliott threw for 321 yards, two touchdowns and no interceptions. In the end, though, it wasn’t enough. North Carolina had a handful of opportunities to put this game away late but collapsed, instead. Now at 1-5, UNC must travel north to Virginia.

Can’t lose during the bye week, you guys.