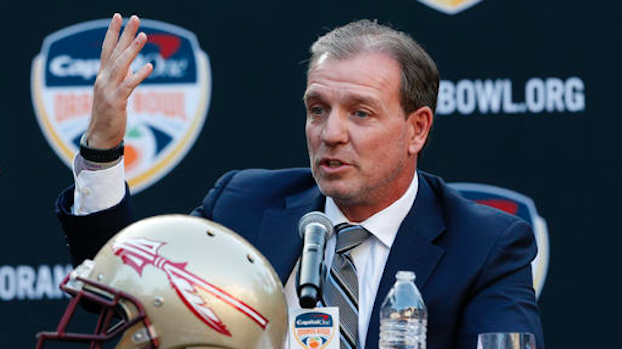 Florida State athletic director Stan Wilcox announced on Monday that the school and Jimbo Fisher have agreed to extend the head football coach’s contract through at least the 2024 season.

Fisher will make $5.55 million per year under the new agreement. A year will be added to the contract each time FSU wins nine games, for a maximum of two years.

“Coach Fisher has done an outstanding job in leading our football program, and is clearly one of the top coaches in college football,” Wilcox said. “He is committed to maintaining the elite status of FSU football and we are fortunate and proud to secure him for the long term.”

The 51-year-old Fisher has guided Florida State to a 77-17 record since becoming the program’s head coach in 2010. The Seminoles play Michigan in the Orange Bowl on Dec. 30 after posting a 9-3 regular-season mark this fall.

Fisher’s name has been tied to the LSU job each of the last two seasons. The Tigers retained Les Miles after the 2015 season, and Fisher opted not to take the job after Miles was fired in September.

“I am proud to be the football coach at Florida State University, and I am happy we were able to reach a long-term contract to have our staff in place for a long time,” Fisher said. “We are committed to developing young men in all phases of their lives and we have the administrative staff in place to do this.

“Florida State is a special place and I look forward to continuing to build on our past success into the future.”