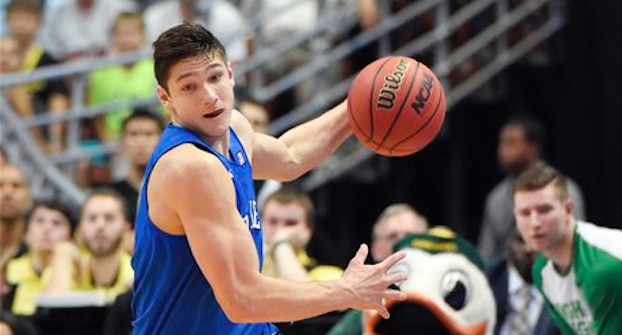 Grayson Allen emerged as one of the nation’s best scorers as a sophomore — a ruthless mix of efficiency and high-volume usage. He averaged 21.6 points per game on only 14.3 field-goal attempts (true shooting of 61.6 percent). Allen scored 779 total points during the 2015-16 season, which is the seventh-most in school history for a single season.

He now sits at 932 career points, which means he’s closing in on a rather impressive benchmark.

Throughout Duke’s illustrious basketball history, 64 players have scored 1,000 or more career points; the list is topped by J.J. Redick’s 2,769 points (No. 2 in ACC history, behind Tyler Hansbrough) and includes a variety of stars, like Jay Bilas, Carlos Boozer and Chip Engelland.

Allen, who has played in just 71 career games, is just 68 points shy of this milestone.

So, when will Allen score his 1,000th career point? There are a couple ways to look at this. Let’s say he maintains his scoring average from a season ago; if that’s the case, he’d eclipse 1,000 during Duke’s Nov. 19 game against Penn State in Uncasville, Conn.

Duke scored 2,920 total points last season, which means Allen’s total accounted for 26.7 percent of the team’s scoring load. Ken Pomeroy has the Blue Devils pegged as the No. 1 offense in the nation heading into this season; he also projects Duke to score a total of 258 points in its first three games.

If Allen is able to claim his 26.7 percent chunk of that total, he’d get to the 1,000-point mark even quicker. It’s safe to say that within the first two weeks of the season — perhaps sooner — Allen will unlock this achievement.

The Blue Devils have more firepower this season, but Allen will get his touches and should see a more clear path to the rim with improved talent and shooting surrounding him. Duke started the season without star freshmen big men Harry Giles and Marques Bolden, but the roster is full of capable contributors.

Allen won’t be the only player to get to the 1,000-point line this season. Here’s a look at the top 11 returning career scorers in the ACC this season.