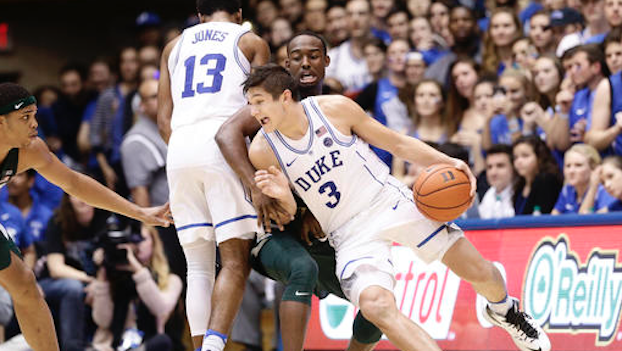 Duke establishing itself as one of the nation’s most effective offenses has become the norm.

The Blue Devils have finished in the top four nationally in each of the last four seasons in Ken Pomeroy’s adjusted offensive efficiency ratings. Even in 2013-14, when Duke bowed out in the the NCAA tournament to Mercer, the Blue Devils had the nation’s top offense, according to KenPom.com.

This season, the Blue Devils are again No. 1 in those ratings as they’ve sprinted to a 10-1 start and carry an active eight-game winning streak,

The Blue Devils are shooting 49.3 percent on all field goals, 14th in NCAA Division I, and have made 58 percent of their two-point shots — No. 9 in Division I.

What should be scary to the rest of college basketball, of course, is that Duke has averaged 86.5 points per game at less than full strength. With freshmen Jayson Tatum and Marques Bolden having played only three games, and with Grayson Allen finally getting his health back after battling a nagging toe injury, Duke is primed to bury its foes with an even more effective offense as ACC play approaches.

And that’s without 6-11 freshman center Harry Giles, once considered the top player in this talented class, having played at all.

Giles, recovering from October arthroscopic knee surgery, is back practicing and could make his debut either Monday when Duke plays Tennessee State at home or Wednesday night when the Blue Devils face Elon at the Greensboro Coliseum.

Infusing all this healthy and fresh talent into an already powerful offense will be a challenge for Duke coach Mike Krzyzewski and his staff, albeit one any staff in the country would welcome.

Expect Allen and Tatum, along with early-season player of the year candidate Luke Kennard, to continue to be major forces on Duke’s offense even as the rotation gets deeper. On the inside, Amile Jefferson has become a double-double machine, and there’s no sign that should abate.

Tatum, even in limited minutes after recovering from a sprained foot, has been a major contributor. He’s been involved in 24-28 percent of Duke’s possessions since returning, according to KenPom.com. Allen has also been involved in that many possessions, although over 10 of Duke’s 11 games.

That’s a good sign that as Tatum gets healthier and returns to full game shape, he’ll be trusted to get points for Duke. Allen, the preseason All-American guard, is held in the same esteem by Duke’s staff.

Kennard and Jefferson have been involved in 22.1 and 21.9 percent of Duke’s possessions so far, and they are big-time producers as well. Kennard averages a team-best 20.0 points per game while the 6-9 Jefferson is averaging 15.1 points and 10.5 rebounds per game.

Giles will need time to work his way into Duke’s offense and get accustomed to playing again. Remember, he missed his entire senior season of high school basketball while recovering from a torn ACL.

By the time March arrives, Giles will be in better position to demand more opportunities in Duke’s offense. But it won’t be crucial to Duke’s ACC and NCAA title hopes.

Duke will be one of the nation’s top teams — if not the best team — relying on Allen, Tatum, Kennard and Jefferson with a dash of freshman guard Frank Jackson off the bench.