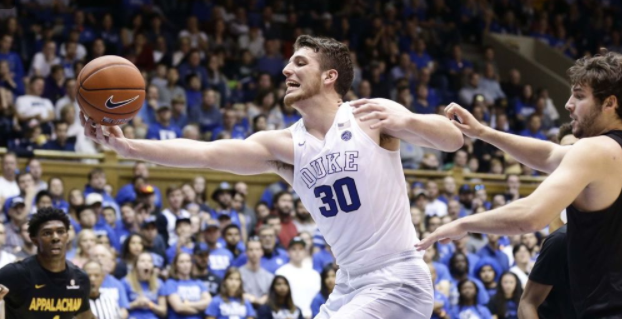 Antonio Vrankovic is shooting better than 58 percent from the field to start the season. (AP Photo).

One of the pleasant surprises of the young ACC basketball season for Duke has been the performance of backup big man Antonio Vrankovic.

Not much was expected of the sophomore heading into this season, but a rash of injuries to the Devils’ prized triumvirate of freshmen — Jayson Tatum, Harry Giles and Marques Bolden — has forced Mike Krzyzewski to mess around with his projected rotation. That has placed Vrankovic into action, and so far, the 7-footer has delivered.

Vrankovic has played just 67 minutes across six games this season. However, he’s been a nice piece for the Blue Devils. The sophomore forward has made seven of his 12 shots from the field while shooting nearly 64 percent from the free-throw line. In Duke’s most recent game — a win in Durham over Appalachian State — Vrankovic posted a career-high eight points (3-of-3 shooting from the field). Where he’s made his hay, though, has been on the glass: offensive rebounding, specifically.

Vrankovic is second on Duke’s roster with 12 offensive boards; Amile Jefferson is the leader with 14. Vrankovic, however, leads the Blue Devils in offensive rebounding rate: 21 percent. If he’d played the requisite number of minutes, this metric would rank in the top five nationally, according to Ken Pomeroy. (North Carolina’s Tony Bradley and Kennedy Meek are Nos. 1 and 2, respectively, in Division I for offensive rebounding rate.)

Vrankovic has played 45 fewer minutes than fellow sophomore Chase Jeter, but a case could be made that Stojko Vrankovic’s son has outplayed the former top-15 recruit. This isn’t to say Jeter’s been bad; on the contrary, he’s had some nice moments early on for the Blue Devils. However, Vrankovic’s offensive rating (points per 100 possessions), per Sports-Reference, is better than Jeter’s: 128 compared to 111.5. Vrankovic is also accounting for more win shares per 40 minutes (0.23) than anyone on Duke’s roster not named Luke Kennard, Grayson Allen or Amile Jefferson.

It’s early, but Vrankovic has been effective for Coach K. As long as the diaper dandies continue to sit, the Blue Devils staff will have to rely on Vrankovic, and that includes Duke’s Nov. 30 meeting with Michigan State at Cameron Indoor Stadium.