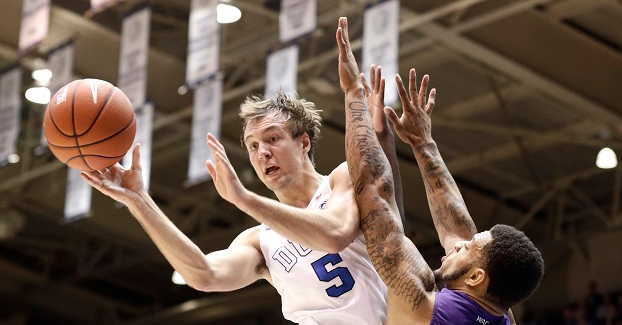 Duke basketball is in the midst of its longest break of the season. The Blue Devils haven’t played a game since Dec. 21 when they beat Elon, and play doesn’t resume until an ACC showdown with Virginia Tech on New Year’s Eve.

That gives us a chance to step back and once again appreciate what Luke Kennard is doing for Mike Krzyzewski’s club this season. It’s still just December, but the left-handed sophomore has been the best player in the ACC thus far.

Kennard has a nice all-around game, for sure. He snags nearly six rebounds per game, which allows Duke to downsize and play small without sacrificing too much on the glass. The lefty assists on 15 percent of Duke’s made field goals while on the floor, too. However, what really makes Kennard special is the most important skill in basketball: shooting the ball.

When you watch Duke play, it’s abundantly clear that Kennard never stops moving. He’s constantly running off screens (floppy, single-double, whatever), working two-man action with one of Duke’s other gifted perimeter stalwarts or zipping into dribble-handoff action with Amile Jefferson — a deadly look.

It’s one thing to try to stop a player by taking away his pet move or shot location; it’s a whole other thing when that involves tagging, tracking and locating Kennard as soon as he steps over half court. He doesn’t need the ball to be dangerous.

There are currently four ACC players scoring better than 20 points per game; Kennard is one of them. The sophomore pours in 20.4 points per game, but he does so on far fewer shots and possessions than his other 20-point brethren.

All four of these guys get the job done in remarkably efficient fashion — no one has a player efficiency rating (PER) below 20.

(It will have to wait for another day, but what Michael Young and Jamel Artis are doing at Pitt is ridiculous. No two teammates have ever finished No. 1 and No. 2 in the ACC in scoring, which means we could witness history this season.)

Look at this chart, though: Kennard attempts just 13.5 field goals per game. Of this group, he has the best true shooting percentage, and he uses the fewest percentage of possessions — by a wide margin. When Kennard is on the floor for Duke, he shoots, gets fouled or turns it over (which he rarely does) on around 23 percent of Duke’s possessions. Up at Pitt, Young is destroying fools, but he’s also using one-third of the Panthers’ possessions.

Kennard is the special type of shooter that when he catches the ball, the green light should always be on. However, it’s possible to see the gears in his head spinning when he catches the ball: “This is a good shot, but how can I get a great one?” Then Kennard will throw the ball back out and race off another screen, trying to establish an even better look. Kevin Durant described this as picking the “good apples” two years ago, and if KD subscribes to a theory, it’s safe to say that’s a solid mindset for a shooter to have.

About 43 percent of Kennard’s attempts are of the three-point variety, which is a healthy clip but also down from his freshman season — when nearly 52 percent of his attempts came from beyond the arc. Kennard has been lethal from the midrange (a lot of those DHOs with Jefferson end up here) and is shooting 59 percent on two-pointers. He’s getting to the line more this season as well — Kennard attempts seven free throws per 100 possessions, one more than last season.

Duke possesses the No. 3 offense in America: 119.4 points per 100 possessions. Kennard has played more minutes (466) than any other Blue Devils. Jefferson and Kennard have teamed up to be Duke’s driving forces. Kennard ranks No. 36 in the nation in offensive rating, with a number north of 1.3 points produced per possession. He also leads the ACC in win shares, with 3.4. Give Kennard another game or two and he will have already passed his win shares total from last season (3.7).

This is truly special basketball taking place in Durham. ACC play started this week; the rest of the conference should be on high alert.