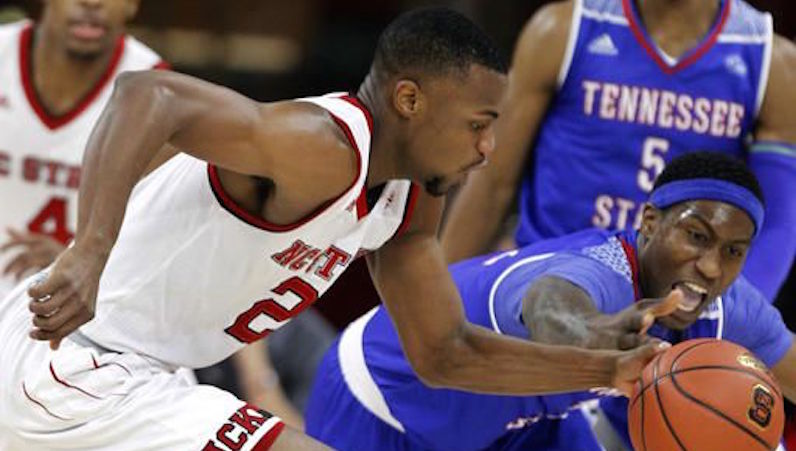 One of the more intriguing players heading into the 2017-18 ACC basketball season will be Torin Dorn of NC State.

In the debut season of Kevin Keatts, how does Torin Dorn fit into the picture?

Possessions to be used

Dennis Smith Jr. ranked No. 107 in Division I basketball with a usage rate of 28.4 percent this season, according to KenPom. Terry Henderson and Maverick Rowan combined to launch 561 field goal attempts in 2016-17. The point being, opportunities are abound for new era of NC State basketball.

As we’ve discussed in this space before, NC State will have some growing pains next season, but there’s the framework of a potentially explosive offense. Dorn is a big part of that optimistic picture, too.

Why should Wolfpack fans feel optimistic?

Dig a little deeper, though, and there’s a lot to like with Dorn as a scorer. Dorn spent little time in isolation this season, but he found success in that department.

He shot 50 percent on isolation possessions, which is rather good, per Synergy Sports. Amongst players with at least 20 iso possessions, Dorn ranked sixth in the ACC in terms of field goal percentage.

Under Kevin Keatts, UNC Wilmington didn’t run much isolation; according to Synergy, less than six percent of Wilmington’s possessions were spent in isolation. But Dorn will still have plenty of one-on-one scoring opportunities.

Another skill the versatile Dorn flashed was the ability to shoot off the bounce. This is a really valuable attribute.

Dorn scored 1.34 points per possession and shot 60 percent on jump shots off of a dribble. That — amongst players with at least 30 possessions — is tied for No. 4 nationally in offensive efficiency on said possessions.

Who’s the player Dorn tied with, you ask? Well, that would be the No. 2 pick in the NBA Draft: UCLA’s Lonzo Ball.

Dorn can be an efficient double-digit scorer for NC State next season — period. Without Ted Kapita and Maverick Rowan, the Pack has a lot of available minutes at its forward spots. Dorn will soak up a large chunk of that playing time.

NC State’s most talented lineups will likely feature two traditional post players: Abdul-Malik Abu and Omer Yurtseven. It seems likely that State will start Markell Johnson at point guard, Baylor graduate transfer Al Freeman at the two, Dorn at the three and Abu and Yurtseven as twin towers down low.

Keatts will have the ability to tinker with positions, too. Dorn is a decent small-ball power forward option. Mark Gottfried tried those lineups this season, and while it proved effective scoring the ball, the defense struggled. Dorn played heavy minutes as the team’s nominal four against Creighton; in that game, the Pack allowed better than 1.3 points per possession. Yikes.

But if Keatts needs to gin up some offense, Dorn at the four could certainly be an option. The Seahawks played a lot of four-around-one basketball last season; Keatts wants shooters and playmakers on the floor.

Torin Dorn will be in high demand.