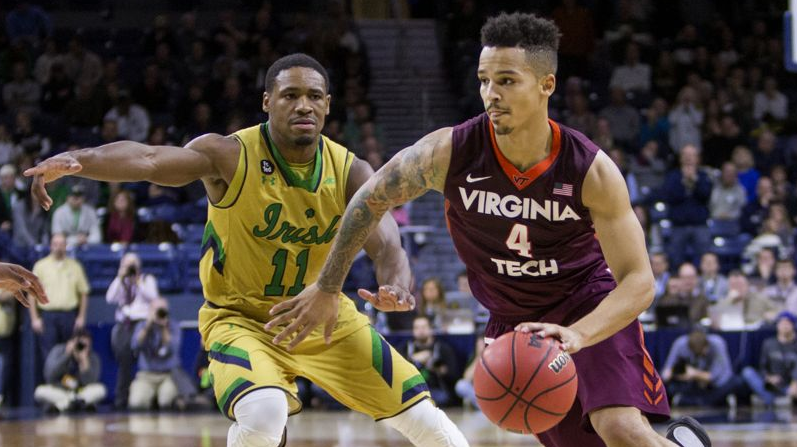 During his first season in uniform for Virginia Tech, Seth Allen was one of the most desperate chuckers in the ACC. He attempted 157 three-pointers (4.5 per game) and made just 28 percent of them.

Allen and Eli Carter of Boston College were the only two players in the ACC last season to attempt 150 or more three-pointers and shoot below 30 percent.

While at Maryland, Allen flashed a pretty strong shooting stroke from distance; over the course of two seasons as a Terrapin, he connected on nearly 35 percent of his three-balls. Nothing to write home about, but still pretty good. However, in his final season as a collegian, Allen has found a calling coming off the bench for Virginia Tech — and he’s shooting better than ever before.

As a team, the Hokies are quite prolific from distance; they have five players averaging at least one made three-pointer per game on better than 36 percent shooting from beyond the arc. Allen, however, leads the way. He ranks No. 57 in the nation in three-point shooting. The southpaw has snapped nets on 21 of his 45 three-point attempts (46.7 percent).

Allen’s playing time is down, slightly, to 27 minutes per game, and he’s using far fewer possessions in Virginia Tech’s top-50 offense. After using better than 29 percent of Tech’s possessions in 2015-16 (a ridiculous number), Allen is down to 20.4 percent this season, according to Sports-Reference.

The major improvement for Allen has come in terms of his improved ability to shoot off the catch. Per Synergy Sports, Allen ranks third in the ACC — scoring 1.55 points per possession — on catch-and-shoots while shooting 51.7 percent. Both of those figures are better than some of the league’s prominent long-range bombers: Luke Kennard, Grayson Allen, Kyle Guy and Joel Berry.

That is a major advancement over a season ago, when Allen shot just 30.3 percent on catch-and-shoots opportunities, according to Synergy. He scored fewer than 0.91 points per possession on these plays, which ranked 73rd in the ACC.

Think about that improvement. His points per possession on catch-and-shoots increased by around 70 percent. That’s astounding.

The increased efficiency hasn’t just come from outside the arc. Allen is shooting above 60 percent on two-point field goals this season. He rarely isolates, but he has found a groove as a savvy pick-and-roll ball-handler.

Allen ranks in the 99th percentile nationally in terms of point per possession produced as the orchestrater of a pick-and-roll — 1.26. That is the best number in the ACC — above Joel Berry, Grayson Allen and Dennis Smith Jr. Seth Allen has also made 69 percent of his field goals when he shoots on these possessions.

Turnovers continue to plague the Virginia Tech senior, however. After posting a turnover rate of 20.4 percent last season — already too high — Allen has seen that number balloon to 25.4 percent as a senior, according to KenPom. In ACC games, that number leaps to 26.2 percent.

Even though Allen has been fantastic in pick-and-roll action, he still turns the ball over better than 21 percent of the time on those possessions. The case could easily be made that he could become even better at initiating ball-screen offense if he would value the ball slightly more.

Allen’s scoring is down on a per-game basis; he is averaging 11.1 points per game, which is his lowest figure since his freshman season at Maryland — back when the Terps were still members of the ACC.

What matters more than that, though, is how efficient and productive he is within a smaller number of possessions. This is where Allen has landed and excelled as a senior. Less is more. This minimalist approach has paid dividends for Allen and the Hokies in 2016-17.