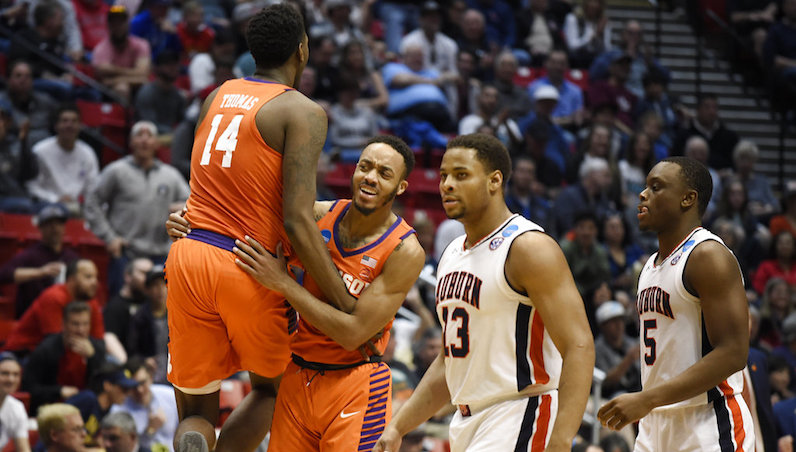 I hope you, basketball consumer, are enjoying your brief hoops sabbatical — before, of course, gorging yourself on more NCAA Tournament games later this week.

Before the Sweet 16 gets started, here’s one to thing know on all four ACC teams still remaining in the tournament: Duke, Clemson, Florida State and Syracuse.

Duke’s defense ranks No. 8 nationally in adjusted defensive efficiency, per KenPom, in part because of the team’s ability to avoid fouls. The transition to zone is complete; according to Synergy Sports, nearly 48 percent of Duke’s half-court defensive possessions have been spent in zone — 93 percent over the last 11 games.

The Blue Devils rank first in the nation in opponent free throw attempt rate — 22 percent. That’s down from 31.2 percent last season. This could be a problem for Syracuse, too.

Syracuse has scored 24.3 percent of its points from the free throw line, which ranks No. 7 in Division I. Free throws from Battle, Howard and Brisset — alone — account for 17.6 percent of Syracuse’s total points.

However, when these two teams met four weeks ago in Durham, Syracuse attempted six free throws — a free throw attempt rate of only 7.4 percent.

Marcquise Reed emerged as one of the top attacking guards in the ACC this season — 15.8 points, 66 three-pointers, 142 free throw attempts and a 20 percent assist rate. One of the aspects to Reed’s game that makes him so special: his ability to shoot off the bounce.

According to Synergy Sports, Reed shot 41.7 percent (50.4 eFG%) and scored 1.01 points per possession on jump shots off the dribble this season; this ranks fifth in the ACC and 84th in the nation in terms of efficiency (minimum 50 attempts).

This stacks up reasonably well with point guard wunderkind Trae Young, who declared for the NBA Draft this week. Young scored 1.05 points per possession (35.6 FG%, 52.3 eFG%) on off-dribble jumpers — No. 60 in the nation.

Back in January, Oklahoma defeated Kansas in Norman, 85-80; Young led the way with 26 points on nine field goal attempts. In this game, Young went 3-of-4 on jump shots or floaters that came unassisted and off the dribble — for a total of eight points, per Synergy.

When the two teams rematch a month later, though, Young was held to 11 points on 13 field goal attempts in a blowout win for Kansas.

This is nothing groundbreaking, but Clemson will need Marcquise Reed to hit tough shots and score in leverage situations to upset No. 1 see Kansas.

Can Florida State finish at the basketball against Gonzaga? The answer to that question could determine Friday’s result.

The Seminoles, according to Synergy, shot 58.8 percent and scored 1.22 points per possession on non-post-up attempts at the basket — No. 63 in the nation and fourth in the ACC.

For a 6-foot-6 wing, Terance Mann is an absolute star when it comes to attacking and finishing at the rim. According to Synergy, Mann shot 68.1 percent and scored 1.46 points per possession on these types of attempts. In a category that’s usually dominated by springy rim-running centers, that ranks 65th nationally — and fourth in the ACC. He’s the only player in the ACC under 6-foot-10 to finish in the top 10 of this category.

Gonzaga isn’t a great shot-blocking team — a rejection rate of 9.7 percent, No. 130 in the nation; however, the Zags held opponents to just 49.1 percent and 1.01 points per possession on non-post-up attempts around the basket, per Synergy — 12th best in Division I.

Everyone that watches Syracuse basketball knows at least two things: the team’s success starts with the 2-3 zone on defense, and finishes with the offensive production of its industrious trio: Tyus Battle, Oshae Brissett and Frank Howard.

In the ACC this season, only 14 players recorded at least 1,000 minutes and posted usage rates above 23 percent — possessions that end with a shot, shooting foul or a turnover. Battle (who played in 99 percent of Syracuse’s minutes in league games), Brissett and Howard are included in this list; Syracuse is the only ACC programs with three players to hit these benchmarks. (UNC had two: Joel Berry and Luke Maye.)

According to Sports Reference, only six Division I players played 1,300 minutes with usage rates north of 23 percent. Syracuse — with Brissett, Howard and Battle — accounts for 50 percent of that list.

Including transition and half-court possessions, only seven ACC players have used at least 600 possessions this season, so far. According to Synergy, Battle ranks first (739); Howard is fourth (674); Brissett is seventh (608).

Game of Zones: Duke, Syracuse and why the past matters in the present