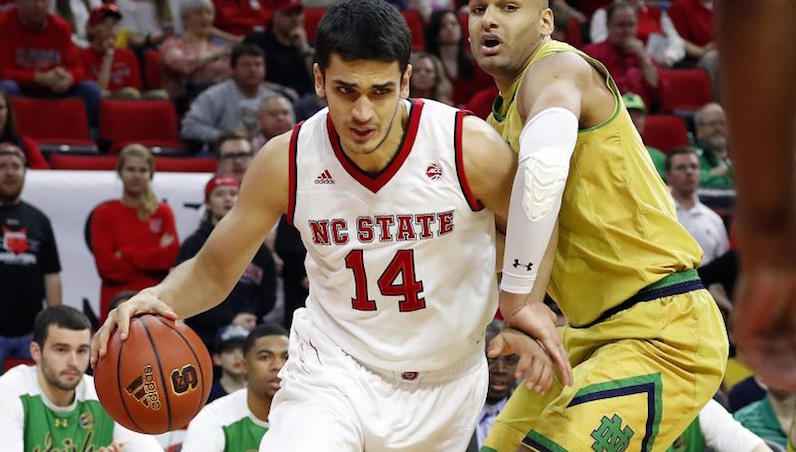 Welcome back, Omer Yurtseven. After testing the NBA Draft waters last spring, the sophomore center is in Raleigh for another trip around the sun. As Kevin Keatts stressed at ACC Operation Basketball, Yurtseven badly wants to get to the NBA. His 2017-18 audition is about to start.

A new era of NC State basketball launches this week; Keatts will coach his first game for the Wolfpack, when NC State hosts VMI on Friday. NC State will count on Yurtseven, especially early one with Abdul Malik-Abu on the mend with an MCL sprain. Can he deliver?

Whether it was a challenge for Omer Yurtseven to adjust to the speed and strength of ACC basketball, or it was a lack of offensive ingenuity from the coaching staff — the post game never happened last season for the freshman.

Obviously, it’d be a big boon for Yurtseven to improve his back-to-the-basket and face-up game. In Keatts’ offense, that may not be a priority, though.

Yurtseven can stand out in the new offense, if he can contribute in the screen-roll game, offensive rebound and occasional stretch the floor with a jumper. By the way, those are the type of discrete skills that are far more valuable in today’s NBA, than a garden-variety post-up.

According to Synergy, Yurtseven shot just 35.7 percent as a roll man last season, but under Keatts, Wilmington was one of the nation’s best pick-and-roll offenses. Roll men scored 1.42 points per possession for the Seahawks in 2016-17, per Synergy — tied for No. 1 in Division I ball. Wilmington as ran pick-and-rolls far more frequently — 4.5 percent of its possessions. Can Keatts and Yurtseven find some synergy and production in this department?

In NC State’s crowded frontcourt, Omer Yurtseven played only 416 minutes last season, across 22 games — less than 19 minutes a contest. Well, several of those players — Ted Kapita, BeeJay Anya — have dispersed. Abu is hurt, too. If Yurtseven’s conditioning is up to par, he will have his run of the minutes, even with Lennard Freeman back.

That could be a good thing for the Pack.

Look at a basic box score, and Yurtseven’s numbers won’t blow you away. Obviously. However, when adjusted for 40 minutes, there’s a little more data to inspire confidence. Yurtseven averaged 12.5 points, 9.2 rebounds and 2.5 assists (11.1 percent assist rate). Let’s say Yurtseven’s minutes increase — along with his usage (18.6 percent, a below average number) — then we should see a spike in his overall output.

An even more important development for Omer Yurtseven will be his defense; did he get any better after last season? NC State ranked No. 229 nationally in defensive efficiency last season, per KenPom. That simply can’t happen again.

Yurtseven was plagued by the team’s poor point differential, and perimeter defense that didn’t know how to defend. Go back and watch the Creighton game from last season; the dribble-drives were unstoppable. Yurtseven may possess some defensive capabilities.