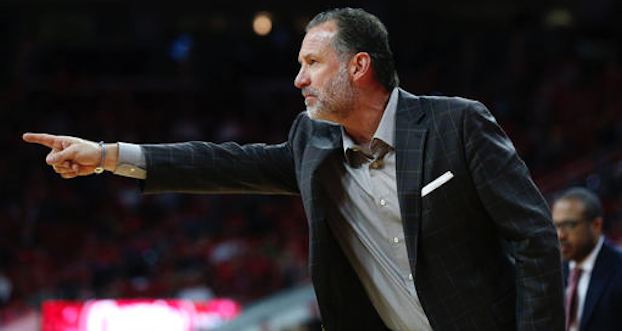 Mark Gottfried would like to see better defensive performances from his team following the loss to Creighton. (AP Photo)

It’s not often in basketball that a team scores 94 points, makes 14-of-28 threes and finds a way to lose. However, that’s exactly what happened Sunday night when NC State took on Creighton in the Paradise Jam tournament. The Wolfpack had four players score in double figures, including two that went for 20-plus: Dennis Smith Jr. (21) and Terry Henderson (28). This is usually a recipe for success, but when a defense gives up 112 points over the course of 40 minutes, it’s really hard to win games.

From the opening tip, NC State players simply couldn’t stay in front of their man. Creighton scored on their first possession — a dunk from Justin Patton courtesy of Maurice Watson, who tied Smith with a game-high seven assists. The demolition was on from there. Dribble-drives were an impossibility to prevent; help defense was routinely late; and pick-and-roll coverage left a lot to be desired, to say the least. Beyond that, though, there were multiple times when State players just lost track of their assignment, including on baseline out of bounds sets. According to Ken Pomeroy, Creighton scored 1.4 points per possession, which is light-your-hair-on-fire bad for NC State. Duke currently has the No. 1 offense in America; they’re scoring 1.21 points per possession.

Creighton sniped 13 3-pointers, but they did most of their damage in the paint and at the rim. NC State allowed them to shoot 27-of-39 (69.2 percent) on two-point field goals. For comparison: North Carolina was the best interior offense in the nation last season, and they shot a little under 54 percent from inside the arc. NC State grabbed just 20 defensive rebounds in a game that had an estimate of 82 possessions, which is a lot for a college contest. The Wolfpack averaged just 72.5 possessions per game in their first three games of the season.

The Bluejays return a lot of firepower from a season ago, and they’ve perennially been one of the nation’s most efficient offenses. From 2012-14, Creighton finished in the top five in offensive efficiency for three-consecutive seasons, per KenPom. Currently, they rank eighth nationally: 115.2 points per 100 possessions. This is a really dangerous team on that side of the floor; that said, it’s borderline unconscionable for State to defend this poorly. The Wolfpack now rank 98th in the nation in defensive efficiency.

NC State recorded just three steals, and forced 10 turnovers from the Bluejays. Creighton had a turnover rate of just 11.6 percent, which would rank in the top 25 of this metric for the season, thus far. All of this adds up to a defensive disaster; Tom Thibodeau would blackout if forced to view this tape. This is how you allow the second most points in a game in school history. Only Maryland way back in 1978 scored more points in a game against NC State.

Mark Gottfried’s club will certainly have better nights on the defensive end. While their man-to-man fundamentals were poor Sunday evening, it’s clear the Pack ran into a buzzsaw: Creighton has six players averaging more than nine points an outing. In just a few more games, NC State should have their full compliment of players, and hopefully Omer Yurtseven and Ted Kapita can bolster their screen-roll defense, which Creighton played liked a fiddle over the weekend. This team has a depth and a lot of athletes; it’s clear they’re one of the nation’s top offenses. However, going forward — starting Monday night against Saint Joseph’s — the Pack needs to commit to improving their perimeter defense.