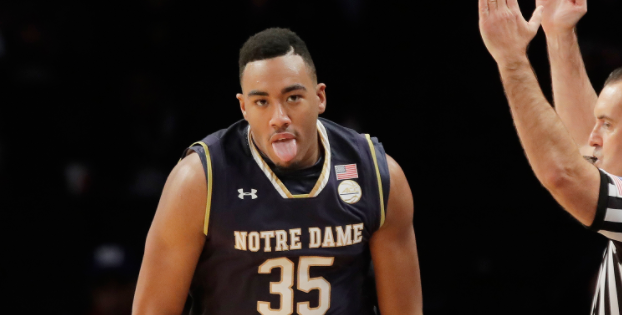 Seven up, seven down.

Notre Dame played a septet of games in the first month of this hoops season, and the Irish did nothing but win. Leading their charge was junior forward Bonzie Colson, who has gone from unheralded gem to one of the top players in the ACC.

Colson was the best player on the floor in Notre Dame’s Nov. 29 win over Iowa. He racked up 24 points (on 14 field-goal attempts), went a perfect 12-of-12 from the free-throw line, grabbed 17 rebounds, posted an offensive rating of 1.48 points per possession and blocked three shots. It was Colson’s fourth straight double-double and the second time in the last four games he’s gone for at least 22 points and 12 rebounds. He averaged 17.3 points and 12.8 rebounds per game over that stretch of games.

Colson’s perimeter jumper wasn’t falling (0-of-3 from beyond the arc), but Iowa couldn’t keep him off the glass (six offensive rebounds). According to Ken Pomeory, Colson ranks 38th in the nation in offensive rebounding rate. He’s collecting more than 15 percent of available offensive rebounds. North Carolina’s Tony Bradley, by the way, currently leads the ACC in that metric: 25.6 percent.

Colson’s wingspan (nearly seven feet) allows him to be a great shot-blocker, too. He’s swatting 1.6 shots per game, and his block rate (six percent) ranks within the top 150 numbers in the nation, per KenPom.

Mike Brey spoke with ACCSports.com before the season started, and he mentioned that Colson would shoot more three-pointers this season. So far, nearly 16 percent of Colson’s field-goal attempts have been of the three-point variety; he’s attempted 13 three-pointers on the season. In his first two years in South Bend, Colson attempted only 19 total threes in nearly 1,300 minutes of action. He’s now getting up nearly two three-pointers per game and making 38.5 percent of them.

Early on, Colson finds himself at or near the top of the list with regard to a variety of catch-all statistics among ACC players: win shares (1.8), win shares per 40 minutes (.344) and player efficiency rating (34.6). He’s also getting to the charity stripe more this season — 12.3 free-throw attempts per 100 possessions — where he’s shooting a robust 91 percent.

Colson’s turnover rate of just 7.1 percent, according to Sports-Reference.com, is outstanding, especially once you factor in his above-average usage rate (26.6 percent). Colson splashes threes, gets to the free-throw line and doesn’t turn the ball over. That’s the recipe for an efficient offensive talent.

Notre Dame has a host of great players; any team in the nation would love to have guys like V.J. Beachem and Steve Vasturia. However, Colson is the most valuable player on the No. 7 offense in the nation, per KenPom: 116.3 points per 100 possessions. Bonzie Colson is now properly rated as one of the best players in America. Treat him as such.