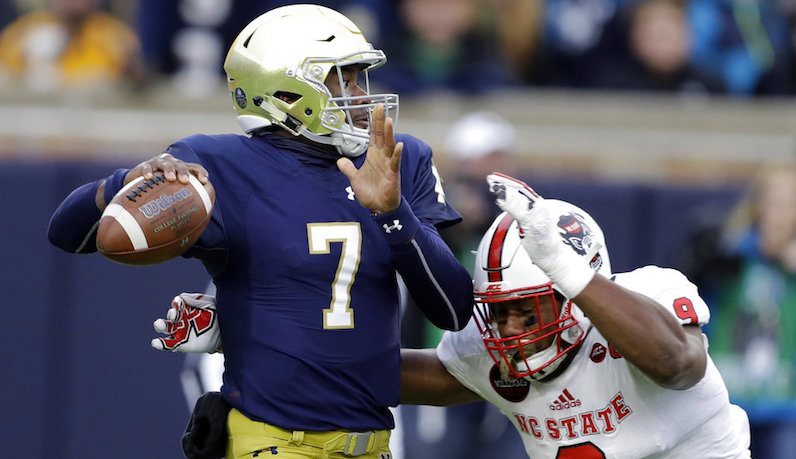 It was a rough Saturday afternoon for NC State up in South Bend; the Wolfpack, without Nyheim Hines, fell easily to Notre Dame, 35-14.

NC State’s offense stalled, and the defense lost contain of Josh Adams too many times. However, one Wolfpack defender still put together a solid game: defensive end Bradley Chubb.

At this point, Chubb is good for a couple solo tackles and a sack in every game, which is exactly what he produced against the Irish: eight total tackles and a sack of quarterback Brandon Wimbush. Chubb, however, isn’t alone when it comes to potent ACC pass rushers. In fact, he is one of many.

Sack the city…or quarterback. Whatever.

Bradley Chubb has 7.5 sacks on the season, which ranks second amongst Power 5 players. Right behind him: Wake Forest’s Duke Ejiofor — who has seven sacks this season. For their efforts, both players were named to the Bednarik Award semifinalist list.

In total, five ACC players were named to the Bednarik Award list; Clemson’s Dexter Lawrence was also recognized. A few of Lawrence’s teammates could likely claim snubbery, though. According to Sports Reference, 55 FBS players have five or more sacks so far this season. Clemson joins USC as the only two teams to have at least three players with five or more sacks.

There are 15 ACC players with at least four sacks this season, so far. Here’s a look at the list, which includes the player’s position group’s Havoc Rate, per Football Study Hall.

Havoc Rate measures the percent of plays a position group either forces a fumble, records a tackle for loss or defends a pass.

Dorian O’Daniel is having quite the season, too. O’Daniel is one of only two FBS players with at least five sacks and two interceptions, per Sports Reference. He’s the only Power 5 player to hit these benchmarks.

North Carolina’s defense has been carved up on a few occasions this season while the team sputtered to a 1-8 start. Malik Carney has made some plays, though. Carney ranks inside the top 10 in the ACC with nine tackles for loss. UNC’s defensive line, led by Carney, actually ranks 38th nationally in Havoc Rate, per Football Study Hall. That’s solid.

Pitt’s Darrin Hall stayed ready, makes the most of his opportunity at running back