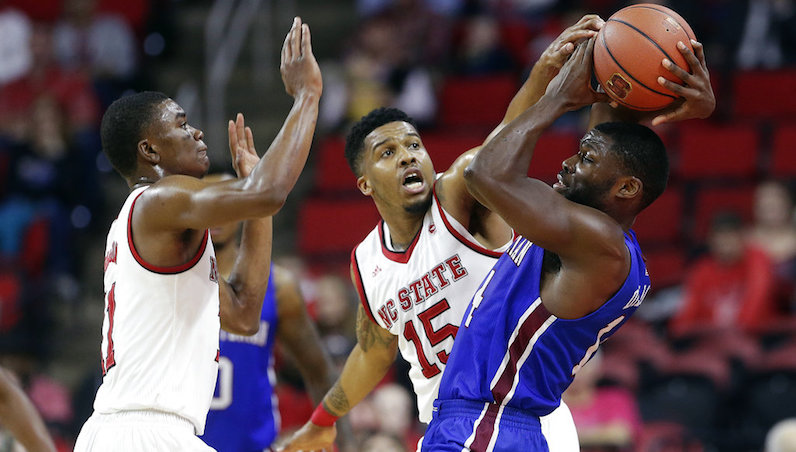 It’s been a busy week for NC State, which improved to 4-0 with a win over Presbyterian. The Pack has a few days off now before a marquee matchup with one of the top teams in the nation. Here’s a quick look at two early-season developments for NC State.

During Mark Gottfried’s six seasons at NC State, the Wolfpack finished outside of the top 100 in KenPom’s defensive efficiency ratings four times. The highest-rated defense ever put together by the Gott Man in Raleigh ranked No. 76 in Division I — back in 2014-15.

Also over that stretch: NC State never forced a high-volume of turnovers. In four of Gottfried’s seasons with the program, the Pack finished outside the top 300 in terms of defensive turnover rate, according to KenPom.

At times this season, NC State’s defense hasn’t been great, like when it gave up 44 points in the first half to Presbyterian. However, NCSU looks more engaged on that side of the ball than it has in a long time. In fact, the ball pressure has been so good, NC State ranks second nationally with a turnover rate of 31.1 percent, per KenPom.

In the first three games of the season, the Pack forced a turnover on 21.6 percent of the pick-and-roll possessions it defended (ball handler or roll man), per Synergy Sports.

Point guards Markell Johnson and Lavar Batts have led this charge. Both rank inside the top 100 nationally in terms of steal rate, per KenPom.

Batts and Johnson are both averaging at least four steals per 40 minutes, according to Sports Reference.

On offense, NC State is powered by the interior production of Torin Dorn and Lennard Freeman. To keep the paint clean, though, State needs to start hitting some perimeter jumpers.

NC State has launched just 72 three-pointers so far this season — 18 per game. That registers as a three-point attempt rate of only 27.2 percent — No. 317 in Division I. The Pack is shooting only 26.4 percent from downtown, too, which is a sharp decline from a season ago (35.6 percent).

This is what happens when you wave goodbye to good shooters like Terry Henderson and Maverick Rowan, and a player like Dennis Smith Jr. — that’s a stud at slash-and-kick action.

Al Freeman, in a smaller role, was a plus shooter at Baylor; he shot 43 percent and scored 1.24 points per possession on catch-and-shoot opportunities last season, per Synergy. So far this season, he’s just 6-of-18, but there’s plenty of time to turn that around.

It’s not just Freeman, though. The whole team is in the midst of a power outage from deep. Graduate transfer Sam Hunt is in Raleigh to shoot. After a hot start, Hunt has missed his last seven shots from beyond the arc, and is just 6-of-22 (27.3 percent) on the season. Freshmen point guards Braxton Beverly and Lavar Batts are a combined 1-of-12 (8.3 percent); Markell Johnson is 3-of-10.

Fortunately for NC State, shooting — especially from long range — is one of those things that can fluctuate over the course of a longer season. A slow start doesn’t mean it’s time to hit the panic button just yet.

NC State has a monster challenge on the horizon, too — No. 3 Arizona in the Bahamas. The Wildcats are led by junior wing Allonzo Trier, who is one of the best players in the nation.

Arizona has been a little loose with the basketball — 16.9 percent turnover rate, per KenPom — but this is still one of the top five offenses in college hoops. NC State will need to hit some three-balls to keep up with Arizona.